Gap Years Are Sexy, But They Come At A Cost...

As COVID drags on, there's a popular topic that's coming up more often in families with college age kids - THE GAP YEAR!

What's a Gap Year? Here's how Wikipedia describes it:

"A gap year, also known as a sabbatical year, is typically a year-long break before or after college/university during which students engage in various educational and developmental activities, such as travel or some type of regular work."

Ah, the Gap Year. If you've had people in your family who have taken a Gap year to travel and "find themselves" and it was even remotely funded by your family, raise 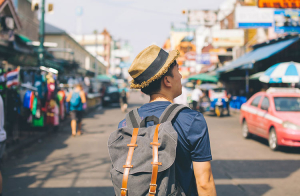 your hand. That's a definition of comfort and privilege, regardless of your race or any other identifier.  I'm not hating on it, but it's a very comfortable thing.

As they used to say back in the day, "It's good work if you can get it."

But Gap Years are back in the news, more the result of the pandemic than of privilege.  Two factors make it a hot topic:

1--Remaining fears about the safety of being on campus and in a general college population, and more to the point,

2--The fact that almost EVERY FREAKING COLLEGE IN AMERICA trumpeted the fact that they would be BACK ON CAMPUS this fall, only to move everyone in, secure the local economy for another 4 months (annual leases on and off campus) and CASH THE CHECKS before announcing they were moving back to a primarily virtual learning environment.

Thus, some people feel smart for taking a Gap Year this term, and others are considering taking one starting in the winter and spring terms, now that the cat's out of the bag related to "yeah, we didn't really ever think we would be back on campus - sorry!"

But the Gap Year ultimately has a cost, primarily in lifetime earnings.  More from USA Today:

A new study out this week  by SimpsonScarborough finds that 40% of incoming freshmen are likely or highly likely to not attend any four-year college this fall. Last week, Harvard reported that more than 20% of its first-year students are deferring enrollment.

But there could be a downside to delaying college by a year: the potential loss of $90,000 in lifetime earnings, according to a study from economists at the Federal Reserve Bank of New York. That might seem counterintuitive, given that the pandemic has pushed the jobless rate higher, prompting questions from families about whether it’s the best time to make a pricey investment in a college degree.

The pandemic has made a college degree more valuable, not less, partly because the prospects for people with only a high school diploma are far weaker in the pandemic than for those with a bachelor’s degree.

So how does that $90,000 in lost income come about? Mainly by foregoing the first year of income earned by a college degree – about $43,000 on average, the study found. A gap-year graduate would start earning that same income a year later, and never quite catch up. For instance, a 25-year-old gap-year student would earn about $49,000 on average, compared with about $52,000 for a grad who didn’t take a year off. That adds up over a career to $90,000, the study noted.

As a parent with a kid in college, it's tough to see him back at school but not getting the true college experience. I'm OK with paying, as his 4-years is a reasonable cost ticket, which I'm thankful for.

But I suspect there's been a lot of trust that's been decayed with Universities in their relationships with families and students.

I suspect the new Gap Year will change over time to the Virtual Year, where families and students pick the lowest cost option to make progress on degrees from virtual locations, wait out COVID and transfer credits in to the brick and mortar school when this is all over.

Congrats colleges - glad you got paid. You should hope this COVID thing gets solved by Summer of 2021, because if not, the economy in your towns and cities is going to crater.

Posted at 10:45 AM in Change, Compensation, Economics, Travel | Permalink | Comments (0)

If you've ever wondered (what, just me?) what companies and vendors have the biggest share of corporate expense accounts/submitted expenses for approval, look no further.

The Certify SpendSmart™ quarterly report analyzes the most recent business expense transactions and vendor ratings data to provide valuable insights to Certify clients and the corporate T&E industry at large.

Translation - who is spending money on what?

In a bit of a surprise, Uber Technologies, Inc was the most frequently expensed vendor last quarter, according to Certify, a software provider enabling companies to manage travel expenses. Uber receipts made up 12.7% of all corporate transactions among Certify customers. On average, travelers spent $25.37 per Uber transaction.

Below is the entire trend chart (email subscribers click through if you don't see the the image below), which includes some interesting stuff:

Note - being at the top of this chart doesn't mean you're generating the most revenue, only that you own X out of every 100 expensed items.

If you click through to see the entire report, you can add up categories to get a better idea on what the total market share is for each industry

My hot takes on the data:

--Much has been said about today being a bad time to be a taxi driver.  It would also appear it's a bad time to be in the car rental business from the growth of rideshare total expensed receipts over the past couple of years (from 9.5% of corporate expense transactions 2 years ago to today's 16.5%)

--All airlines cited are down .25% of corporate expense transactions over the same 2 year period. Since we're in a peak economic period, the continuing growth and sophistication of video conferencing and virtual meetings would seem to be cutting in to airline growth.

--The presence of Starbucks in the top 2 shows its continued dominance in morning meetings, but the fact it's down a full percentage point of corporate expense transactions (down 18% over a two year period, per ticket price down significantly as well) means people are finding other places to go, growing a bit tired of Starbucks or finance is challenging the expense.

The only thing missing from the report from Certify is the strangest vendor that shows up in the top 100, 200 or 300 results.  I'd like to see that.  The fact that Amazon and WalMart show up as top 10 in corporate expenses hides many of the expensed items/companies we could have fun with.