Are You a Jerk for Sending that Email at 9 pm?

No, you're not. But a growing number of people in the world will say that you are a jerk for sending that 9 pm email. 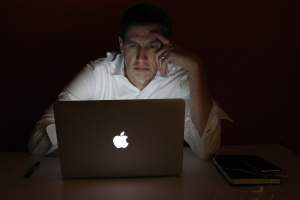 You being a total machine and working to get things done isn't the issue. The issue is the perception that you're projecting your workhorse mentality onto others who report to you who can't match your speed, urgency, or general kick-ass vibe.

In today's world of empathy, mental health awareness, and work/life balance considerations, a growing population feels like you're part of the problem with your drive, ambition and . . .

A recent Wall Street Journal column cited a study of perceived urgency of after hours emails.  Here's what they found (link to full column here):

"We examined this question in a series of studies with a total of more than 4,000 working adults. We had participants take the perspective of either a sender or a receiver of a non-urgent work email sent outside work hours. We asked “senders” to indicate how quickly they expected a response and asked “receivers” to indicate how quickly they thought senders expected a response from them. We consistently found that receivers overestimated the need for a fast response—something we call the “email urgency bias.”

In both studies, we found that, on average, receivers assumed they needed to respond 36% faster to off-hours work emails than senders expected. What’s more, the receivers reported feeling more stressed by off-hours work emails than senders expected them to feel, and the stress associated with this unnecessary pressure resulted in lower subjective well-being.

Without question, when a work email comes in after hours, a lot of your direct reports are going to treat it with more urgency. As they should, if you're the boss. The best practice is laying some ground rules for what you expect when you send the after-hours email.

But before we dig into that, let's further define the players in this email game of after-hours communication. Below is my roster of the players involved.

There are Three Types of Managers When It Comes to Sending an After-Hours Email:

1--Fire away, let's get s**t done. You might or might not expect an answer to your after-hours email. But you'll be damned if you're going to worry about how people feel when you send late or weekend emails. By the way, I support you getting things done. Shine on, you crazy diamond. There's a reason you're in the seat you're in. The bottom line is if no one is sending after-hours emails, you probably don't have much of a company.  Don't shoot the messenger. It's true. "A" players aren't held captive by broad, over-arching calls for empathy.

2--I'm not sending this now, it will be seen as anti-work/life balance. This manager has seen the light related to work-life balance and is not sending the message out when they think of it, making a note to send it out during normal business hours. Is this rationalization? Is this the most efficient path? I could argue that many of these messages would be delayed by getting busy. In addition, managers who can say they never send out after-hours emails probably aren't—wait for it—working after hours! I could also argue that managers who don't work at least some after hours and weekends are on average trailing from a total production/results perspective. Again, don't kill the messenger. All things being equal, a manager putting in fifty hours is going to outperform one who works only normal business hours. Hard facts from the salt mine.

3--I'm sending now but via Outlook's send later tool, so people think I'm cranking it out in the morning. Ah! The evolved manager related to after-hours emails. This manager says the following: "I'm here kicking ass after hours, but I'm aware that culturally, people are starting to be criticized for work/life balance signals with off- hours emails. I'm using 'send later' so people think my work day starts at 6:22 am." This manager works when they want to work and, if they don't need the response immediately, is winning the game of public opinion by timing messages to be more palatable. They're still crushing the team to get s**t done; they're just showing that they are evolved, even if they wonder why others don't work the way they do.

But let's not forget the employee side of this after-hours email exchange. You can talk about work/life balance all you want, but the reality appears below.

There are Three Types of Employees When It Comes to Email Management:

1--I respond within the hour to anything you send. Nights and Weekends included. You love them. Maybe they do need protected a bit. But damn, it's nice to know they're there.

2--I don't respond during nights and weekends, but I'm in control and you aren't disappointed by my timeliness of response. Cool. You still love #1 better, but you see this group and trust this group. We're good. Look forward to your response to the 9pm email in the morning.

3--I have trouble being responsive to email. It doesn't matter when it is sent, you'll rarely feel like you're a priority. The dirty secret to all the work/life balance world yelling about your after-hours emails is that even if you send all your emails at normal times, this segment still sucks at responsiveness. They're also probably the first ones to bitch about your work ethic and drive, and yes, your 9:31 pm email about the Sparkman account.

Run through it, and your choices are clear. Keep doing what you're doing or adapt.

The Wall Street Journal article recommends making these disclaimers in your after-hours emails—I kid you not:

--“Even though I’m sending this email outside regular work hours, which fits my own work-life schedule best, I don’t expect a response outside of your own work hours.”

--“Please know that I respect boundaries around personal time. If you receive an email from me during your personal time, please protect your time and wait to respond until you are working. It’s important that we all prioritize joy over email whenever possible.”   (KD note - !!!!!)

I'd recommend the following options: 1) do nothing different and keep on rocking emails when you want, 2) adapt and use the "send later" option and still rock how you want to rock, or 3) make sure everyone on your team knows that you'll text or call them if you need an immediate reply to an after-hours email, which prevents you from the absurd messaging recommended above in every after-hours email.

If you're concerned about this, I'd recommend the "send later" option. It still says you're working harder than most and need people to be in range of your sense of urgency. I'd text people as needed without making the proclamation.

The bigger the company, the more you'll need the strategy in this area in years to come. Big companies follow broader society trends more responsively than smaller companies.

Your employees' feelings matter. But then, so do yours.

Hi Kris,
Great post about the real pandemic: the people that need to be protected from their own feelings of inadequacy (clearly I belong to manager group no 1 :)) I am just wondering about all these people offended by 9pm emails: if this bothers them and the cherish their down time then why are they still on those devices in the first place? Keep the laptop shut down and your work phone on silent. Voila.

Yes you are a jerk for sending that email at 9pm.

You are entitled to your own rhythm of work, so if it's your thing to spend your evening on work, then you be you. And yes, employees "could" shut down the laptop and switch ff the work phone.

But, setting the expectations around presenteeism is mostly modelled by managers, as is so clearly explained in the WSJ article. And truth is, for most of us working in traditional, Mon-Fri office jobs.... it's not that often that an emergency is going to pop up that has to be dealt with at 9pm instead of 9am the following morning.

So don't be a jerk, write your email, use the "send later" feature on your email or save it as draft and hit send at normal working hours the next day (BTW sending it at 6am is just being as much of a jerk - showing off that you as a manager are only about work).

Your employees that are as driven as you are will jump on it first thing and clear it, even at the risk of delaying the truly important work they are supposed to focus on. And it won't change a thing for "regular" employees who will respond in a "regular" timeframe - you will still be biased agains them for not being like you anyways ("Similar-to-me" effect in full swing) !

Don't be a jerk by ignoring the reality of the psychological pressure that receiving an email from the boss at 9pm is creating. Don't "hide" behind the fact that you've "told everyone that you will send emails in the evenings but don't react to them, I will send an SMS or call of it's really urgent". This "solution" is just about keeping your own mental comfort because you can't unplug, and sharing that burden with your team members, who did not ask for it.

As HR professionals, we are supposed to look after inclusion, diversity and employee wellbeing. We are supposed to support creating a culture where everyone can thrive, not just the small % of alphas who want to become top management.

I really disliked the undertone of "snowflakes", "weak", "entitled" that runs through your article.

And BTW : I am one of those over-achievers (SVP of a multinational at 36 years-old, multiple expatriations, career in high tech and world-famous organisations). I did make my teams work until midnight when required, BUT : we all knew it in advance and had agreed to it - it was during annually planned crush times - and I was giving everyone time off afterwards. I never sent evening or break-of-dawn emails outside these time periods and respected their personal lives. The best A-players actually *do* show empathy while still getting the work done.

It really depends on the content of the message as to whether the person is working hard, being a jerk or something much worse. As someone who works around the clock, I still set limits on what I expect from others.

I have seen executives send emails out late at night because they were insecure—worrying if someone might be taking advantage of perks or taking five extra minutes at lunch. A midnight update to a policy manual does not need to ding everyone in the middle of the night.

Honestly, if you're that insecure about your own leadership ability you are not a leader. The rest of the staff probably already knows.