Home Subscribe
Thinking About Work in 2021: It's Probably Time To Get Out of the Fetal Position...
Capital Riots: Considerations for Great HR Leaders...

The Value of a Confidential Search BEFORE You Fire an Incumbent...

We've all been there. There's an incumbent in a key position, and for whatever reason, they're not getting it done.

So you do what you have to do. You make a move (more gracefully known as an organizational change) and you open up the role. If you're lucky, you nail the search, and within 45 days, you've got the new person starting.

But, of course, sometimes the search in question is a train wreck, or maybe it's just a difficult search. 30 days turns into 60, then to the siren-emoting 90 day mark. In the interim, team members who now have no manager or a weak position interim leader are sending each other videos of famous castaways to note their rudderless floating in your organization.

Which begs the question - should you have done a confidential search and kept the struggling person in their role until you found a replacement?

Confidential searches feel bad - a true d**k/ass**** move in the mind of many. But before you discount this type of search as counter to your organizational ethos/values/integrity, you should probably ask yourself what the true cost of having the spot open for 60-90 days is.

Let's workshop whether a confidential search is right for you. How does the team feel about the person underperforming in the role in question?

--They hate him. OK! Your instincts to term and do a search are on the money. You'll be seen as a liberator, someone who "gets it" and made a move. Victory lap time, maybe even an email that majestically positions you as a liberator. If you are really up for it, hold a F2F meeting after the change with the team!

--They like/love her. DANGER. This team is likely focused on the person, not the performance. You term her, and you're the ass****, and the longer it takes you to fill it, the more chaos there is going to be. THIS SCENARIO IS THE ONE WHERE DOING A CONFIDENTIAL SEARCH MAKES THE MOST SENSE. Protect yourself before you (as Ice Cube so eloquently once put it) wreck yourself.

--They're neutral. There's no love or hate. This is the jump ball, and the big question is whether you feel lucky. Well, do you?  Because if you think you can make the move and get this thing filled in 45 days, you're probably OK. But the longer the spot is open, the shittier people are going to get. This one's on you. Tough call for sure.

For a nice primer on the potential value of the confidential search, I present two scenarios from the world of college football in 2020. Auburn University decided to part ways with Head Coach Gus Malzahn after 8 years, firing him in season and starting a national search. After a reported 7 candidates told them no in a very public way, they finally made a hire. The fan base (parallel to your employees) widely believed the search to be a complete clown show, because it took a long time (which can and will happen to you) and because the misses were so public (less likely to happen to you, except if you decide to make the team part of an interviewing process).

Now contrast that with the University of Texas (UT).  UT also wanted to change their football coach, but chose to talk to candidates in the background (confidential search) and have a deal done before they made a move. As a result, the announcement of the firing of Tom Herman was followed up by the announcement that UT was hiring Alabama Offensive Coordinator Steve Sarkisian within 24 hours of the press release of the firing.

In other words, it was a done deal. They had their candidate via a confidential search and had agreed to terms.

By the way, Steve Sarkisian was also a candidate for the Auburn job, but told them no in a public way. Cue the water cooler talk of whether management knows what the **** they are doing. 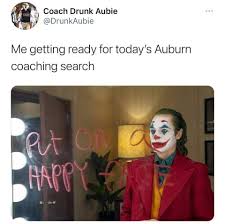 The need for both searches was the same. Good, but not a great, leader who had not met oversized expectations at the organization they were serving. But one search was public, created organizational disruption that could have been avoided, and resulted in a perception that the organization got its 8th choice for the job in the marketplace - that is the recruiting marketplace we live in. The other search allowed the organization to recruit from a point of leverage, with a coach in place and the signal that we don't have to backfill this position unless we find the right deal for us.

I get it. It still feels itchy-scratchy, doesn't it?

Being more open to confidential searches is hard, because it doesn't feel like we're being 100% honest. But the brutality of what happens when you make a move, then miss a few times and hear the clock ticking sound and organizational float growing more prominent with each passing day, means you should always consider it as a business person.

Confidential searches are a tool for consideration. You should probably be using them more than you are if you're a C-level leader in your company.

Check your feelings at the door.

This is an interesting stuff you have here and this is a good learning experience. I hope you can give us more information and updates regarding this topic. But overall you did a great job creating this article. Keep it up!

Nice Post!! Your article is too good and informative.Keep writing and sharing educational article like this which can help us to grow our knowledge.