Home Subscribe
What To Do When a Person of Influence Asks You For Extra Work...
Post-Election Skill for Leaders: Making All Feel Welcome & On Equal Ground...

Election day is here. So many voices shouting, so let me add my thoughts to the mix with a bi-partisan thought that's not said enough these days: 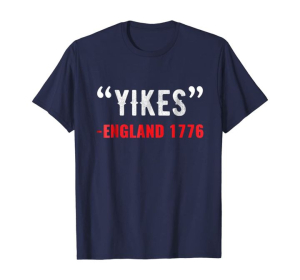 Let's start with my favorite songs from Hamilton, which you can find on Disney+. If you're looking for a reason to feel good on election day, you could do much, much, much worse.

It's been a rough year in America. Pandemic, George Floyd, second phase of the first wave of the pandemic and now, one of the most disruptive elections in history. The economy is questionable and things have never felt more divisive - which obviously spills over into the workplace, thus the post on something you thought had nothing to do with HR...

Note that I'm hardcore moderate that thinks both polar extremes politically in the states are 100% crazy.

Here's 5 reasons I'm still bullish on America, with some HR/management thoughts embedded within:

1--We live in a country where you can actually tell the leader to "F off" directly to him/her via his social account. He might even "@" you! I just think it's interesting and a complement that our society/constitution allows for that and people aren't afraid to do it.  Try that in Moscow, Wuhan, Istanbul or Cairo these days, friends.

I don't agree with the decision to tell a leader from any party to F-off publicly. But I'll support your right to do it until the day I die. Side note - be careful with this approach with a leader in your company. Like the Dixie Chicks in the early 2000's, you'll find out that your right to free speech is protected, but the free market can and will remove you from corporate consideration. Also note the Dixie Chicks are now The Chicks, because Dixie didn't survive the cut in 2020 but "chicks" is OK, but as FYI, I've issued an advisory for dudes not to get comfortable using that term. Got it? Cool.

2--We have a history in the USA of being getting fed up, then vocal and moving for change. It's a long history and I could list all the problems America has had through the years - but you're aware of the history. Instead, I'm going to focus on what actually happens over time in America. People are vocal, critical mass is formed and change happens. It's easy to say it takes too long  - it sure does  - but just grab a live look in at St. Petersburg, Tabriz or Shenzhen for perspective. Also noted that it remains very much a work in process - as the George Floyd events illustrate (see my posts on the aftermath of George Floyd here and here, as well as these posts by great writers at my other site (FOT) if you doubt my intent). It's a rough look for the USA right now, but I believe America is 100% going to get this right - both now and in the future.

3--America is still the premiere melting pot of the world.  When I look around at the world my sons live in, I'm happy and proud that their world is more defined by meritocracy via equal opportunity more than mine was growing up. They see race, national origin and gender less than our generation did, and are accepting of people who don't look like them totally kicking a## in various walks of life. Why? America. Also see this map from the Washington Post that is a visual representation of the most and least racially tolerant countries in the world. Spoiler alert: Racism is a problem around the world, and while the USA has so many miles to go, we have some common ground to work from. (Note: I ran this map by some of my liberal friends and they had a hard time processing it. But still, it's the Washington Post on the left and they haven't pulled it down, which to me means it's solid for me to quote).

When I see a Black, Asian or Indian kid/family achieving in America, I'm not threatened. I'm proud they are American. I love it when the melting pot kicks ass.

4--There's still a role for moderates in America. If you're not feeling the polar extremes of either political party here, it's OK. While the polar extremes are less tolerant than ever of your lack of willingness to commit, you've become the swing voter block that drives both sides crazy. You're also probably uniquely qualified to manage people as you've learned to see different points of view and co-exist with the highest % of people. This just in - the best managers of people are the ones who can get as many people in the bus to where we are going in 2021, 2031 and 2041 as possible. It's hard to do that when you say - as both parties do - you're either with me or against me.

5 - AMERICA ALWAYS COURSE CORRECTS. We've had a lot of dark times in our country and we've made some questionable decisions. What I love about America is that WE ALWAYS THROW THE BUMS OUT. Every. Single. Time. Regardless of party. In addition, just when you think you know what the answer will be, America rises up and pleasantly surprises you. Who saw a 6-3 vote FOR LGBTQ+ rights in a Supreme Court loaded with Republicans? No one, and you'd be fair to be skeptical on why that wasn't celebrated more. So be active, shoot your shot and trust the process. If you don't like how things are going in the USA - all you have to do is wait - we are junkies for change and can't accept too much of a single point of view. (side note - the picture in this post is my 4th of July t-shirt. It says, "YIKES", with subscript that says "England 1776")

Let's dig into that "Yikes" reference to close this July 4th post. This recent article from The Atlantic called "The Decline of the American World" digs into the perception of America around the world, especially in Europe. I found the article to be incredibly balanced and why it certainly focused on some negative perceptions of our country, it also featured hot takes by many that the world needs America to be great.

The article is highly recommended. I can't let you go without sharing the close of the article with you, focused on what Charles Dickens found in America:

"Over America’s history, it has had any number of crises—and any number of detractors. Le Carré is just one of many who have delved into the conflicting well of emotions that the United States manages to stir in those who watch from outside, part horrified, part obsessed. In his travel book, American Notes, for instance, Charles Dickens recalls his loathing for much of what he saw on his adventures through the country. “The longer Dickens rubbed shoulders with Americans, the more he realised that the Americans were simply not English enough,” Professor Jerome Meckier, author of Dickens: An Innocent Abroad, told the BBC in 2012. “He began to find them overbearing, boastful, vulgar, uncivil, insensitive, and above all acquisitive." In other words—it’s the aesthetic again. In a letter, Dickens summed up his feelings: “I am disappointed. This is not the republic of my imagination.”

Dickens, like le Carré, captured America’s unique hold on the world and the fundamental reality that it can never live up to people’s imagination of what it is, good or bad. As it watches today, it recoils but cannot stop looking. In the United States, the world sees itself, but in an extreme form: more violent and free, rich and repressed, beautiful and ugly. Like Dickens, the world expects more of America. But as le Carré observed, it is also, largely, an aesthetic thing—we don’t like what we see when we look hard, because we see ourselves."

Translation: The bumper sticker for America could easily be, "AMERICA: WE'RE MORE EVERYTHING THAN YOU ARE".

Which is why we'll be back. Happy election day, America. You are imperfect, dysfunctional, and at times, hard to look at.

But you're still the best thing going. Regardless of the outcome this time around, I believe you'll get this right, as you've gotten so many other things right.

See you at the cookout.

Thanks for this! I always try to remember that it's the media's job to show us the things that are most extreme. Not because they are the most important or relevant, but because that's what makes for good television/reading. When the 1989 earthquake happened in northern California, news helicopters showed a lot of footage of fires - not because there was widespread fire, but because it translated well to video. Today we get a lot of news about cravenly racist people, people who believe in wild conspiracies, people who want to kidnap state officials, etc. But these groups are tiny tiny minorities. What's happening among elected officials is concerning, but it's not happening because of a groundswell of popular support from kooks. Americans will figure this out, and hopefully we'll someday look back on this time like we now look back on the Army-McCarthy Senate hearings and the House Committee on Unamerican Activity hearings from the 50's.

I really like this, I just found out about this. Will be recommending you and your articles to writing friends. Thank you for your generosity. This was an incredibly wonderful article. Thanks for providing these details.

Fascinating, and you did all of this by yourself? I thought entire agency worked with this project…

Try to change something in your lifestyle, change your schedule, get in touch with new people, etc.