Home Subscribe
Faking It vs. Being Authentic at Work: A Primer...(with Podcast after post)
Coaching Your Team on Responsiveness: Don't Focus on What's Fair, Focus on the Game...

If you celebrate innovators, flags at half mast this week for Eddie Van Halen. You can’t celebrate Jobs and Musk without pouring one out for this brilliant artist who changed everything for a generation of GenX minions.

Long before there was social media, YouTube or anything else that created stardom from nothing, there was Van Halen. While the initial Van Halen had another star in David Lee Roth, the cornerstone was Eddie Van Halen. 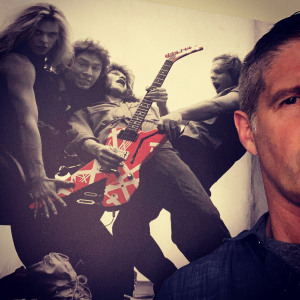 Like all the greats regardless of profession, Eddie took what was known and expanded on it creatively. The result was magic - guitar riffs that the world had never seen, distributed through emerging platforms that only GenX and Boomers remember like "Friday Night Videos."

While the world and band changed around him (Sammy Hagar, WTF), Eddie kept doing what he had always done - creating - including player the guitar with power tools, bringing keyboards into the platform for the band and more.

Along the way, he was the happy creator you always thought you knew and imagined what it would be like to hang out with him.

In business, we have the expectations that the great ones were always a**holes.  For every rule, there's an exception. When it comes to Rock History, Eddie Van Halen was the ultimate creator who changed an industry and became an icon.

Unfortunately, rock is dead. And now - so is one of the godfathers -and that sucks.

(picture from a canvas in my home office)