Are Ageist Microaggressions a Thing?

2020 has been a hell of a ride. Pandemic, recession, re-invention of the workplace and an intense focus on racism.

Without question, we'll make it through to 2021. Things will be better on all fronts. Let's assume the events of 2020 will put us in a better place related to racism, although that topic is a journey, not a destination.

What classes of people aren't getting a lot of attention that are routinely discriminated against?

For me, old people, overweight people and ugly people all come to mind. Some of you just laughed out loud, but it's true. Attractiveness still rules the selection process, whether we're consciously aware of it or not.  But protecting the candidate who's unattractive (so subjective) is down the road. For now, let's focus on what we actually have laws on to prevent discrimination. 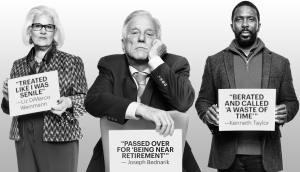 Here's where it gets tricky, friends. A recent Business Insider post: talked about the microaggressions older workers face in the work place. Here's your task - I want you to read the items in bold and tell me whether the comment could be used in a age discrimination case or whether we're all just too senstive:

"Maybe we shouldn't give that project to John, he might have trouble learning the new technology."

The belief that older workers aren't technologically savvy or capable of learning new platforms is damaging and untrue.

A 2016 Dropbox survey of more than 4,000 IT workers around the world found that workers ages 55 and older and those ages 18-34 used nearly the same number of forms of technology a week — 5 and 4.67, respectively, Fortune reported.

"We're looking for a youthful, energetic, agile worker to join our team."

This type of language can make an older worker feel like they might not fit into your company culture. At best it's exclusionary, at worst, it's discrimination.

Many young people have taken up this phrase as a catch-all response to a problematic comment made by someone older than them. But it makes older workers feel dismissed or humiliated. If a coworker has said something you don't agree with, you can easily voice your opinion or state a fact without attacking them personally.

Discrimination in the workplace. It's a real thing for older workers, but I have to tell you this as someone who suddenly has realized he could easily be working for a younger dynamo 10-15 younger than him - the goal of any older worker has to be to look, feel and talk like someone who these things, if said, would seem not to fit him/her.

Simply put, if you're hearing someone ballsy enough to say that you're bad with tech or calls you a boomer to your face, you've probably acted the part in some way.

I know that's hard to hear, and there's a lot of bad actors on ageism that are running around corporate America these days.

But Age Discrimination isn't going away. Be the ball and look, act and feel like someone who could be decade younger. Be curious about tech, new things, etc. Upgrade your wardrobe just a bit to trend younger without looking like a fool.

I'm not asking you to do Tic-Tok. I'm asking you to take action and prevent people from putting you in the "too old" box.  Good luck out there.

(Capitalist Update: I left the draft spelling of TikTok as it appears above when I published as a test of sorts. While this site isn't designed for perfection and I routinely have readers send me notes on grammar preferences, I was wondering who would come forward not only with the spelling correction, but also tell me it made me look old. I got about 3-4X the email I normally get, including 6 people who said or alluded the spelling made me look old. Interesting test. Some of those people did it out of care for me, some don't know me and basically used it to point out my age. Interesting add to the story.)

2021 is already half way through, but the covid situation is still extremely critical for some countries with weak economies.