Home Subscribe
21 HR Jobs of the Future...Do You Buy It?
Cost of Living Pay Cuts for Twitter Employees Moving from Bay Area: Valid or BS?

2020 has been a bear. For many, there haven't been a lot of wins or success to focus on. But as the economy stabilizes and you realize the new normal, you may find the team around you slipping back into some habits that were normal in the 10-year economic expansion that happened between 2010 and 2020. Those habits are likely counterproductive in a post-COVID world, even if your company goes from being on the brink to being "safe" (whatever that means these days). 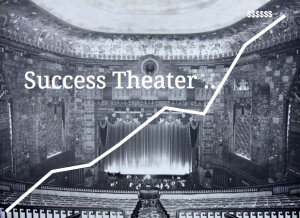 One of those habits is called "Success Theatre".  Below is a quote from John Flannery, the former Chairman and Chief Executive Officer of GE who took over for Jeff Immelt (the guy who followed Jack Welch):

“Flannery had taken to uttering a new mantra around the company’s shiny new offices in Boston: “No more success theater.””

— from Lights Out: Pride, Delusion, and the Fall of General Electric by Thomas Gryta, Ted Mann

Success theater. There hasn't been a lot of that for most of us in 2020, but as stabilization occurs, it's likely to sneak back in. Success theater happens when business units and departmental leaders report the good stuff that's happening in their area, but don't report a lot of challenges. This condition is a big part of operations reviews during up periods, where groups use result readouts as PR campaigns, emphasizing the good and hiding/minimizing the bad or challenges.

2020 has been a terrible year. As you get back to normal as a leader, don't lose sight of the new muscle memory you were forced to develop regarding asking for bad news - either before the good news or closely following a brief golf clap of the good news.

A lot of us had success theater around us from 2016 to March of this year. Remember the hard times, and ask for the bad news early in any operational review you're doing. Institutionalize that ask.

Be paranoid once your company has stabilized or recovered. No success theatre in 2021 or 2022, right?

As a former GE employee, your comments about “Success Theater” are dead on. Companies need to cultivate an atmosphere of trust and create a safe space for conveying what is really happening in their company.

Thanks for sharing this informative blog.