How Buffer Approaches Salary Transparency (It's Kind of Cool)

Attention HR geeks who like to dabble in compensation...

Also, attention anyone who is interested in current events, which finds some highly compensated workers moving out of high priced areas (SF, NYC, LA) to work remote. As you're aware, companies have started communicating they'll be adjusting the salaries of some of this high priced talent to reflect the cost of living in their new locations. 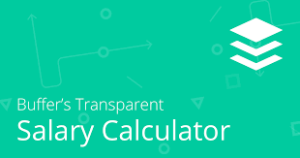 Of course, it's the cancel culture and the "how dare you" culture that's SHOCKED a company would reduce compensation for someone moving from San Francisco to Iowa.

Many of the same people who would rage against the audacity of a company reducing salaries for lower cost locations would also be huge proponents of salary transparency.

And this is the point where we merge both topics - salary transparency and geographical adjustments.

Buffer does a nice job of describing it goals with salary transparency - you can read up on it here.

But what's super interesting about their view on transparency is how they set salaries within a range and how they adjust them up or down. More from Buffer's page that talks about their philosophy and even provides a <freaking> calculator:

This multiplier is still applied by using a teammates’ location to determine one of three geographic bands, based on a high, average, or low cost of living area. We use data from Numbeo to figure out which band applies for each teammate. For high cost of living areas we pay 100% of the San Francisco 50th percentile, average is 85%, and low is 75%.

So let's examine that a bit for what we know about formal compensation plans. The fact Buffer provides one salary they pay for each job (they don't adjust for who you are, that's how they keep it consistent and can do transparency) means that they have elected a single point to pay within a salary range recommended by salary surveys from a provider like Numbeo.  I'd assume they're likely paying at the midpoint in the range (ranges have minimums, midpoints and maximums) for anyone in the role to keep it real.  Then, as stated, they are adjusting through geographical grades or bands in the way described above.

So, if you're moving to Denver, you're taking a 15% cut, which by the way, is super consistent with the numbers reported related to VM Ware and Twitter adjustments (widely reported as 18% for a move from SF to Denver). If you're moving to Ames, Iowa - sad trombone - it's a 25% cut.

Geographical grades and band have been around forever. It's interesting to see a company committed to salary transparency be unapologetic for adjustments for geography.

How can they do it? Simple, when you pay everyone in the same job the same $$, the black box of comp mystery goes away. I'm not saying that's the way to do it, but it's a bit of a case study on how simple it could be, and it automatically addressed equity concerns.

See the calculator online at Buffer by clicking here!!