Good Call Center Jobs Teach You a Lot - But We Might Wonder Why You Didn't Get Promoted...

I love what jobs early in our careers teach and say about us.  There's literally 8 million stories in the naked city, and this is just one of those stories.

But in its own little way, it matters - a lot. 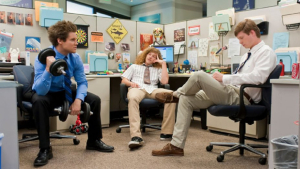 This story is about what happens when a new graduate takes a customer service job at a big company. You know the person, the company and the type of job I'm talking about.

Person - New college grad or a person with a high school diploma who has had a couple of jobs where they strung a bit of success together.  If you're a new college grad, you probably have a business, marketing or liberal arts degree - you're not a STEM major, which is 100% ok.

Company - A big company with a professionally run customer service function - think more than 100 FTEs, and at times 1,000+

Type of Job - Sit your *ss in that chair and take the abuse make our customers happy through 80 inbound calls a day.

While a lot of these jobs are getting replaced by technology, they still exist, and in the opinion of this humble observer, they are great training grounds for a career in the business world.

95% of graduates aren't STEM or technology majors, and they don't come from the Ivy League. The call center job is a natural starting point for a career, if you can land this job in a big company along the lines of what I described above.

You know what's sad? We've created an artificial expectation of careers via a cocktail of social media, college propaganda and related bulls**t that these types of jobs aren't good starting points for a college grad. Talk to new grads, and their expectation is that they should come out of the gate earning 60K. It's a lie for most of the world. Fewer kids are ready to work these days.

But (and there is a but) there's a Darwinian thing that happens in a professionally run, modern call center for a reputable company.

Promote or become staler than the 5-day old bread you left open and out on the porch. Career pathing happens, and the reps who do the work and are good at what they do get promoted - both up the ranks in the call center, and out into other areas of the company. That's how it should be.

But it begs another question.  What does someone in the same modern call center role/job with a big company for 3 years (no inline promotion, no career ladder move or anything else) mean?  It means they're well-placed and lost in the generally open bid for promotions, transfers to other departments, etc.

While the current crop of college grads doesn't want to pay dues in the call center, there's another reality. The world is quick to coddle the same grad who's spent 1 year in the same professional call center job and tell them things like this:

It's not your fault. The system was rigged. There's a bunch of favoritism associated with promotions in that arena.

Nope. You got beat, you didn't get it done. The professional grade call center that's internal at blue chip, well run companies knows what it's doing. You weren't good enough. You being in the same role in that company with a LOT of opportunity within the call center (not even looking at promotions to other areas) means you weren't in the top quartile, and you may be closer to the 50th percentile.

If you have a kid with a degree who's struggling to find his path, encourage him/her to find a great company with a good call center/customer service function, apply and win a job, then go compete like crazy.

Promotions for youngsters in well run call centers matter. They're literacy tests for the ability to grind, perform and compete in a career.

All other things being equal, I'd take a person who put on the headset and went to compete over one who hasn't.

Thanks for shairing this great blog. Have a look this blog related to candidate assessment strategy https://www.hiresmart.com/blog/designing-your-candidate-assessment-strategy

You have some interesting points in this article. I would never have reviewed any of this if I hadn't come across this. Thanks!.

Your favorite legend? In my case it is the mystery of the Bermuda triangle, I wonder what this place is and what hidden secrets it has.