Home Subscribe
Do You Have a Direct Report With Writing Talent? You Should!
The Real Question In 2020 Is This: What's YOUR Platform?

HR Book Review: The Office (The Untold Story of the Greatest Sitcom of the 2000s: An Oral History)...

On my summer reading list is The Office: The Untold Story of the Greatest Sitcom of the 2000s: An Oral History. I originally grabbed the book because it presented an opportunity to connect with my youngest son, who like a lot of kids, has consumed the entire series 3+ times on Netflix. It quickly became a primer on team-based creative process, where ideas have to come in volume, then be culled down quickly to the point that only the best idea makes it, and everyone on the team is OK with that.

One example of lessons from this book is how the writer room was structured and how they blended ownership of ideas from individual to team. Here's the explanation from 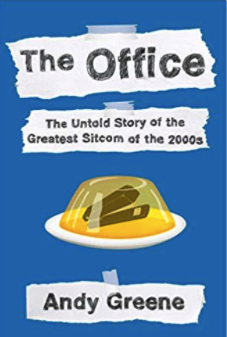 Aaron Shure, co-executive producer and writer for The Office:

"During my tenure [seasons five, six, seven, and eight] we had around fifteen writers, usually three rooms going, and we had inherited the Greg Daniels style of idea generation, which focused on manifesting and externalizing ideas in a physical way, usually in the form of three-by-five cards that came to festoon the walls of the writers’ room if they were worthy enough by Paul and Jen’s estimation. We also had a process called “blitzing” where the writers would hunker down in their offices for an hour or two and come up with as many ideas as we could on a given topic. For instance, a few blitz topics I have in my notes: “Obstacles to Erin and Andy dating.” “Ways Andy and Kelly can try to subvert Gabe.” “What happens with Hay Place?” We’d come back with as many ideas on those topics as we could, read them aloud, and put the promising ones on the wall.

Out of those ideas a few would be selected to move closer to a storyboard. It was a big bubble-sort played out on the walls. While writers would campaign for and champion various cards, it was hard for there to be specific ownership of any given idea, with plenty of duplication and accidental repitching. Similarly, stories were broken in rooms with five or so writers all working on the beats. We’d come back to the room and pitch those boards. There’s a lot of working in a writers’ room that’s similar to improv, where it’s like “Yes, and . . .” You want to be able to keep your mind incredibly open and think of all the possibilities.

Greg actually called it “blue-skying.” Let’s take an example: “Michael is being broken up with and he’s going to handle it like a fourteen-year-old boy because he’s at the emotional level of one. What does he do to process it? How does he deal with something like that?” Sometimes there’s a tendency to just go for the first good idea, but we would spend a lot of time trying to find the best version of something. We would send people off to think and say, “Let’s keep in the blue-sky zone. Don’t put restrictions on yourself. How would a person deal with that?” And every once in a while, something just brilliant would come”

Translation - traditional brainstorming followed by team activity to further develop ideas not only lead to a strong creative process, but it removes the sting of your idea not being chosen - you have ample opportunity to contribute to other idea streams, and when the whole thing is done it's hard to remember the originator of the idea in question.

Recommended book if you liked/loved the office and need a summer read.