Home Subscribe
BEST BOSS EVER Podcast: e3 - Pat Lynch and the State of Outplacement During COVID-19
HR FAMOUS - My Conversation with Ed Baldwin, HR Leader at Mikron (RTW from COVID)...

What Is Your Pettiest Reason For Being Lukewarm On A Candidate?

Updating this post for COVID-19, although most of you are bigger than that. But that doesn't mean we're not all small in some way...

I'm asking. You know you have some type of petty thing - that's caused you to rank a candidate lower 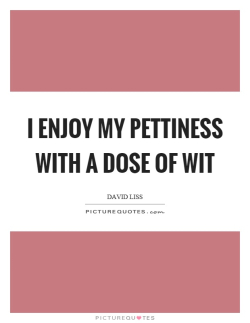 than they should have been.

Candidates who got impacted by COVID? You'll get through that and not hold it against them. But you'll still be holding something small against a cross-section of candidates.

Mine?  I have a hard time with candidates who take me out of my normal messaging environment.  Namely, the ability to use iMessage across different devices and communicate with team members is a preference - not a necessity.  I've hired people that I can't message on the iMessage platform before, and will in the future.  Best candidate wins.

But when I pick up my phone to SMS a candidate rather than iMessage from my mac, I need to remind myself best candidate wins.  Twice.

After the HR interview, the candidates only question for HR is about benefits, or even worse you have none! Really?

I don't think man buns will ever be legally protected.

That's when I move to Canada.

I once passed on a girlfriend candidate because she didn't like The Big Lebowski.

I wish I could give a Facebook thumbs up to the man bun comments posted above....12 of them actually

No thank you note from the candidate! We call it Appreciategate in our office.

Another one: in the "how did you hear about this job" field on our application form, if they put "Online." Like... yes, thank you, we only actually publish job ads online so this provides no information of value to us. Thank you for taking the time, lol.

"Man bun" ahaha! While this is super funny, it's still judging a book by its cover too soon. You may love the book. You may need it more than a book with a pretty cover and fluff inside. Avoiding bias, explicit or otherwise, is so important in order to get the best hires possible. This article is pretty awesome at explaining how to do so: http://recruit.ee/bl-gender-bias-eb-bh

Talking about anything not relevant to their ability to do the job or getting off topic too easily. I do ask about their interests, but if they bring up whatever is on their mind before I even ask, I question their commitment to the job. For example, they go on and on about their farm animals, acting career, or another job. I will never get their full attention to the tasks I will assign them.

It's petty. But it irks me. I will rank them lower than someone who is eager and attentive to my probing.

This Canadian is not personally a fan of the man bun either, but wouldn't stop me from hiring an ideal candidate of course :) KD I like that your little b bias is truly not a big deal. Mine is tough to pin down. I'm so aware of my conscious biases towards extroversion, quality questions and ideas/dialogue, that it's harder to describe what sets me off a in the other direction. Definitely 1) using a word out of context will make it tough for me to relate to them because of what I do for a living. 2) If they don't know who I am/my role as part of the hiring team (ie why i'm there interviewing them), or 3) they don't have any constructive feedback on our content or public facing marketing (even if they recover in other parts of the interview), it'll be a clear strike against. It doesn't take much to do your research. But these aren't that trivial I guess, since they can be deal breakers for me. I usually forget the small stuff if they're the candidate I'm going with.

Limp, or fingers-only handshakes; referring to us as a "company" or "business" when we're a non-profit organization.

When candidates call me Ma'am. Makes me feel rather old :(

If a candidate graduated from "that school up north," I'm going to have a very hard time hiding my bias. If said candidate can handle the history lesson that the last time they won "The Game," the iPhone 4 was cutting edge... Party Rock Anthem was the #1 song.... the Space Shuttle was still a thing... then maybe.... just maybe, we'll get through the interview.