Home Subscribe
THE HR FAMOUS PODCAST: e12 - Getting Paid to Not Work
3 Hard A** Photos About Change During the COVID Lockdown...

Welcome to the recession, team! It's just like any other recession, except that it was caused by a Global Pandemic, which seems a bit - extreme.

But I digress. If we're no longer in the peak economic cycle and over 30 million Americans 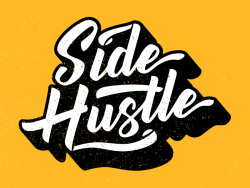 have hit unemployment since mid-March (WTF, and the number is likely much bigger if you count all the underutilized employees that companies are holding onto via cash reserves and stimulus programs like the Payroll Protection Act), it seems like a good time to talk about freelancing, because all of us might need an alternative source of income at some point in the near future.

You know, a side hustle.

Who's good at having a side hustle? According to research conducted by The Hustle, a nifty little business newsletter you can get delivered to you daily, it's who you would expect. Professions most likely to have a side hustle are first and foremost creative pursuits, the kind where companies often have difficulty justifying a full time position. Graphic design, online media and photography all lead the charge in freelancing and putting together portfolio careers rather than relying on (or being able to rely on) a single source of income (email subscribers, click through if you don't see the charts below). 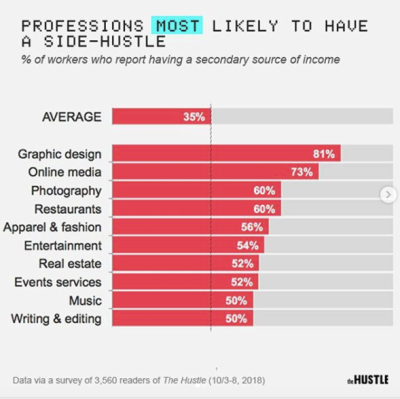 What's that? How's HR doing related to having a side hustle?

I regret to inform you we are neither good at it or comfortable with it. See the chart below from the same research, which shows HR as the third least likely profession to have a side hustle, behind the sexy, risk-taking tribes that are lawyers and engineers (woof). 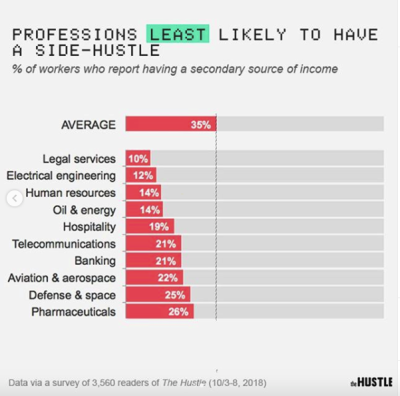 For god's sake, bankers experiment more with a side hustle than we do. #sad

If you're reading this post as an HR or talent pro, I've got good news for you - you're already hungry for knowledge and experimentation with the status quo, or you wouldn't be here.

Why do HR people rarely experiment with the side hustle?  Some thoughts:

--We write the policies on the people side and it feels a little hypocritical to do our own thing after we wrote the blurb on moonlighting.

--Our profession is made of up of rules people, and having more than one job doesn't feel like it's in compliance.

--Our skill set doesn't lend itself to side hustle as the work product isn't as transferrable as the graphic designer.

--We simply aren't a profession full of entrepreneurs. #truth

As far as whether our skill set lends itself to the side hustle or not, well, all you really need to do is look at the tens of thousands of HR Consultants who have hung their own shingle to help small business in American and it's clear - the transferrable skill set argument doesn't hold water.

The real reason for such a low side hustle score is we are full of rules people, and HR for the most part doesn't have an entrepreneurial spirit.

And that's 100% ok.  But in a recession that looks like it may be deep and long, it's probably time to figure out what you could sell if you had to.

There's never a better time to look for a side hustle writing an employee handbook for a small company than... wait for it... when you still have a job.

Recession = get ready to bootstrap.

I would agree with the survey, if this was 30 years ago. Today, I call B.S. The number presented are not accurate by any stretch. As of the early 2000’s, many in the HR world learned with corporate down or “right” sizing to trust only themselves to support their dream. This is the very core the entrepreneurial spirit. In 2008 with the second great depression (call it what you will) most HR pros, that I know/network with, had a side business. Why? To grow it into something they can jump to as a new life path or for backup. Mostly the latter. I was a ahead of the curve. I took the former. In 1998 while with The Coca-Cola Company, in Atlanta, I started my new path, the side job.
Making enough to pay the bills, by 2001, I was ready to jump. With the ringing of my wife’s voice saying “Are you nuts?” still in my ears, I burned through my retirement and put the house on a 2nd mortgage. Never looked back. Today, my firm, The Stonehaven Group-HR has 60 employees and is supporting our clients in 51 countries. I am not alone today. Way more HR pros have the entrepreneurial spirit and are doing great stuff on the side. This survey doesn’t accurately show it. Sorry.

Thanks for the comment. While I'm 100% sure of your intent and thoughts, I've found that most business minded HR people think of themselves as the norm, rather than what's actually the norm.

Maybe the numbers are a bit low, but I think they're still representative of overall position.

In the meantime, stay thirsty.

OMG! I was literally having this exact same convo with my wife last week...almost to a "T" (I think I even used the side hustle term once). Part of it was due to the current sitch we're in but also because I never want to have all my eggs in one basket. Similar to how it's important to have a diverse stock portfolio, one should think in the same terms about their own skill set. I started looking into other things that interest me, that I'm good at (or can get some training on the cheap) , and can generate revenue. My list needs some work though because there's not a big market for B-movie critics, ice cream taste testers, or Dad Joke creators...

Interesting statistics. I think many HR people may not have side hustle because having them usually means you have to promote (sell) your abilities to get business. ($$$).
Around 2010 I got a real estate license to buy/sell/invest on the side. It was a blast. It seemed like everyone I knew was getting their license for the “easy money” from real estate. Many did not succeed because they didn’t understand that is was really a sales job. There was a lot of hustle involved in this side hustle. Lots of networking. Lots of rejection.

I know successful HR consultants doing project or side work. The ones I know understand that having the knowledge and abilities alone won’t bring in the work. Meeting/Knowing/networking with a lot of people that need your services is the key. It’s not just who you know. It’s who knows you.

Hi Jason, glad we have the same thoughts, and what does that say about us? LOL. For what it’s worth, I like to think of side hustle as being complementary to what your court career is. Meaning, that you have your cord career and then you have some things that are related to that, but not in conflict that you can explore and do meaningful work in. Of course, the other way to go is a side hustle that’s completely different from your core career. Keep me posted on your thought process in this area.

Jacki- so true related to side hustles requiring the willingness to try and sell. Often overlooked, but just as important as the actual products. Great point.

I very recently starting working on the side hustle and your article is fuel for the fire to get at it and keep at it! Narrowing down a broad experience base into something that I can navigate the initial marketing is challenging, but it's pretty fun too.