Home Subscribe
ASK KRISTIAN DUNN, LIFE COACH: What's The Equivalent of the Informal Office "Hey" During the COVID Lockdown?
The HR Famous Podcast: E11- The Future is $99/Month HR Managers (and thy stripper name shall be...)

I know, you're burned out on streaming. You've worked through a bunch of things during the COVID lockdown - you whipped through Joe Exotic, Ozark and Bosch - and you found yourself working through a 3rd tier series like Last Chance U.

I see you America. That's why I'm here with a Netflix Recommendation that only a professional manager or HR person could get excited about. 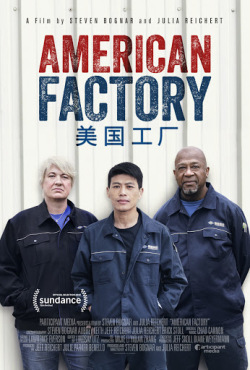 Let's get started with the description of this two-hour documentary from Wikipedia:

American Factory (美国工厂; 美國工廠) is a 2019 American documentary film directed by Steven Bognar and Julia Reichert, about Chinese company Fuyao's factory in Moraine, a city near Dayton, Ohio, that occupies Moraine Assembly, a shuttered General Motors plant. The film had its festival premiere at the 2019 Sundance Film Festival. It is distributed by Netflix and is the first film produced by Barack and Michelle Obama's production company, Higher Ground Productions. It won an Academy Award for Best Documentary Feature.

Filmed from February 2015 until the end of 2017, Reichert and Bognar were granted filming access by Fuyao at both their Ohio and Chinese plant locations. They were inspired to make this film as the events they aimed to depict were taking place in the same Moraine Assembly plant once occupied by General Motors, which was the central topic of their 2009 Oscar-nominated documentary short The Last Truck: Closing of a GM Plant.

I know what you're expecting: China bad, plight of the American blue collar worker miserable.

Turns out, it's more complicated than that.

GM closing the plant follows this script.  But then a Chinese company, Fuyao Glass America, shows up to reopen it. Chinese companies buy American companies all the time. Big deal, right? But Fuyao let the filmmakers film everything.

You'll be rocked when the crew travels to China for company celebrations and you see the attitudes of the Chinese workers and the whiplash cutaways to the American plant and team (spoiler alert - the USA team has about 20% of the urgency of the Chinese team).  The Chinese team doing the same work as the Americans are standing on marks for quick team meetings before the start of their shift. They're celebrating the company through skits, song and other group activities that would make 99% of Americans cringe.

You'll also be rocked as you see young Chinese managers and Chinese workers in the Toledo plant (brought over to help launch the plant) come to grips with the limitations of the American workforce they've hired.

If you haven't had great exposure to globalization yet in your career, I can't recommend American Factory enough. 10 out of 10. As a manager of people or an HR pro, you'll find the contrast between cultures fascinating and the HR and management issues in this culture mashup fascinating.

Globalization is full of gray. I'm 100% on team USA, but American Factory keep you honest about what it takes to compete in global economy.

Great pick, KD. Yes, I was most blown away watching the speed and dedication of the young, slim Chinese workers versus the paunchy, lackadaisical attitude of the middle-aged Americans.

Not just a must-see for HR but for everybody to get their heads screwed on right about globalization, however much of it survives the current pandemic.

Thanks for the recommendation -- I really enjoyed it. Also, got my CR-V's windshield replaced yesterday at a local Safelite in Oakland. On the drive home, I happened to see that the brand on the glass was Fuyao, so that was fun.

Ha! Did you think about the Toledo breakroom when you saw that logo?