Home Subscribe
The HR Famous Podcast: E8 - Video Work Meetings: Winning On ZOOM
COVID-19: It's Probably Time You Doubled Down Professionally On You...

I woke up this morning and learned that US weekly jobless claims jumped to 6.64 million in the week that ended Saturday, per the US Labor Department.. That is more than double the prior week's report, which itself reflected filings that more than quadrupled the previous record.

Here's a chart to really help you feel it (email subscribers, click through it you don't see the chart below).  Thanks COVID-19! 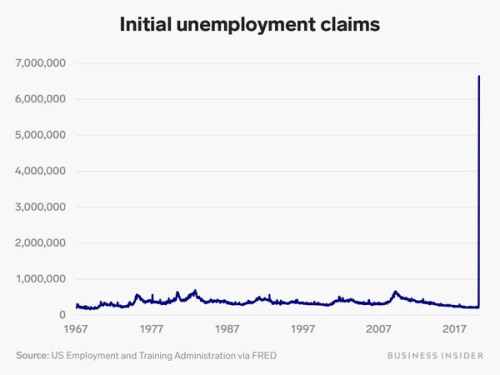 With charts like that, you know what's coming for a lot of HR and TA pros out there? Glassdoor reviews! It's the game HR people love to hate, which for me means it's time for the analysis you've been waiting for:

Let's look at the Glassdoor Reviews.. For Glassdoor the Company!

To get you level set, you can travel to Glassdoor's page on... Glassdoor!. Click here to go the reviews, and I'm sharing a screenshot of the review home page below as well.  Scroll down and I'll give you my top 4 observations about Glassdoor's reviews as a company after the jump. (email subscribers, click through for images below) 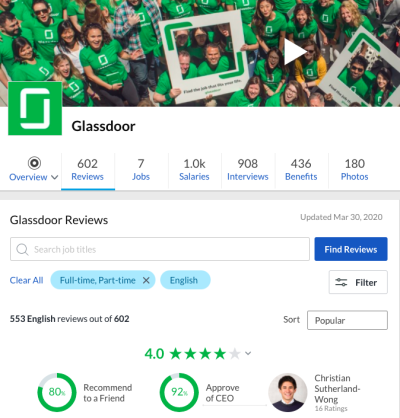 Now you're interested, right? Glassdoor rates as a 4.0, which is good but probably not what you expected from Glassdoor. Here's my analysis of what that overall rating means along with some other observations after digging in a bit:

1--Glassdoor actually drinks the kool-aid/eats the dog food and allows current and former employees to leave negative reviews. Many of you are/were skeptical, and that's OK. But dig in, and you'll see the negative reviews in the profile, just like your company - all with an ax to grind.

2.--The Glassdoor cumulative rating of 4.0 is actually at least a 3.5 for every other company, maybe less. Why? Simple, Glassdoor has to be better than anyone else on earth in asking their employees to consider leaving a review. Think about it, it's part of what they sell in their packages - we'll teach you to make/manage review requests from people who have experienced positive events - a promotion, a big salary bump, etc. For that reason, they have to have more of the "by request" positive reviews than any other company on the planet. That means the 4.0 could be adjusted to a 3.5 via the KD.com-glassdoorindex, maybe more. I'll let you decide whether you would drop them further with this component in mind.

3--Glassdoor has the same problems you have. While it's hard to find, dig into the reviews and you'll find the same pain other people have - Customer service reps, sales people, etc - leaving hard reviews mixed in with the super positive/super pumped reviews. As with all companies, the best reviews aren't the 1-star or the 5-star (even though it's fun to rubberneck at the 1 and 2 star reviews) - the most helpful reviews are the balanced feedback reviews in the 3-star range, and the 4-star reviews that give meaningful "cons" about working at Glassdoor. Here's the slice of Customer Success Manager Reviews, which comes in a "winter is coming" 2.7 overall rating. 4--Where are the ugly people? I kid. Maybe. As you would expect, Glassdoor has done a nice job of taking the employer profile and making sure the art is maximized through photos. But most of the photos are a bit staged for my taste, which is a choice. It would be cool to see one shot of someone talking on a video call to one of you (The HR/TA leader), with you doing what you do - being irate and trying to get Glassdoor to remove a review that names your SVP of Sales by name and actually logs his time in/time out of the office over the course of a week.

TL;DR summary of my review of Glassdoor the company via Glassdoor reviews - they're more like your company than you might think. Adjust for the fact they're better than anyone related to generating positive reviews in their company, and they look like the rest of America for the most part.

Now about those unemployment numbers...