SUPER BOWL BIG THOUGHT: We Expect the Great Leaders to be in a Bunker, Not Domesticated...

Leadership is a funny thing in many ways.

For example, the better leader you are, the more you get stereotyped, and those stereotypes usually involve: 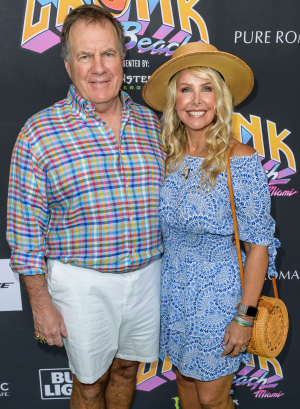 --Always distant enough to make tough calls, or willing to make those calls

--Everyone assumes they're in the lab cooking up the next thing

That's why it was so hard for me when a friend sent me the picture that appears to the right of this post of Bill Belichick, head coach of the New England Patriots. It's a stretch to call me a Patriots fan, but like Alabama and Nick Saban, you have to admire the track record, as well as the total commitment and legendary stories of obsession/long hours/evil mastermindedness (it's a word now).

But evil masterminds don't show up to a beach party that's going to be heavily photographed in attire that makes them look awkward and (gasp) normal, as well as duds that run counter to the legend.

I get that great leaders are people too. Take a look at the picture to the right (email subscribers, click through if you can't see it) and tell me if you can see any of the following great ones in similar attire - Steve Jobs, Meg Whitman, Carly Fiorina, Jeff Bezos, etc.

Is it unfair to say that great leaders can't let their guard down and be normal? Absolutely.

But we expect the great ones to be untouchable - to transcend being normal. We expect them to be in a bunker, not acting domesticated like the rest of us.

The end is near, Patriots fans. Your evil genius has left the bunker, tasted sunlight and a tropical drink in Miami, and the edge is less sharp than it once was.