Home Subscribe
If You're Pointing Me To Your Automated Calendar to Pick a Time, You've Already Lost Me...
THE HR FAMOUS PODCAST: e3 - Companies Get Frisky With Glassdoor, Changes to SHRM Influencer Program

Pete vs. Amy: It's the Conference Room Dust Up That Becomes Legend at Your Company...

Regardless of your politics, the Democratic Debate in Las Vegas on 2/20/20 was must see TV.

Because of policy? Nope. Watching everyone try to destroy Mike Bloomberg? Not even close.

The debate was clutch because we saw some good old fashion hate, loathing and rivalry that looks a lot what you see a couple of times a year between workplace rivals in your 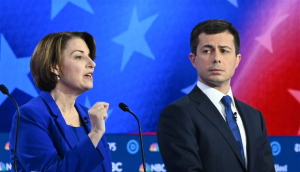 I'm talking, of course, about snipping between Amy Klobuchar and Pete Buttigieg. Here's the description of what we saw, we'll talk about why it feels so much like your conference room gone wrong after the jump:

The hostility building between the two Midwestern Democrats burst dramatically into the open in Nevada, as they clashed repeatedly on the debate stage and tried to slash the momentum out of each other’s campaigns. Klobuchar and Buttigieg have fought before over their experience and their political records in past debates — but the feud took a deeply personal turn.

After the Minnesota senator defended her “momentary forgetfulness” when she failed to name the president of Mexico in a recent Telemundo interview, Buttigieg leaped in, surely thinking of the criticism he’s taken from Klobuchar in recent debates.

“Are you trying to say that I’m dumb? Or are you mocking me here, Pete?” Klobuchar shot back.

That's pure gold. If you're at the Director level or above, you've seen a version of this movie in your career. Here's the workplace-related notes...

In corporate America, Amy and Pete both work for a C-level of SVP type. Amy's been around for awhile and has done great work in her career.  Pete's only been with the company for 18 months and is 10 years earlier in his career, but in that time he's solidified his spot as a go-to guy for the SVP they both report to. There's tension because Pete has a history of framing things with himself as the savior - often at the direct or indirect expense of Amy. Pete's not really interested in paying his dues.

Then it happens. Pete overreaches. Amy stumbles on some issue in the staff meeting, and Pete tries to pounce, talking down to her and pointing out the miss isn't great.

And Amy has absolutely ####ing none of it. She fires back. "I guess I'm dumb, right Pete?"

Suddenly the smoldering loathing is is front of everyone with outright hate. Let it soak in observers, you don't get these moments too often.

Here's how it works in the real world. Pete's boneheaded play causes the SVP to distance himself from Pete a bit. Pete was a dick, and the male SVP values Amy for all her contributions and the last thing he's going to do is side with Pete. He's been through the inclusion training. Pete just left the inside circle.

Amy's good at what she does. She remains in the inside circle, because although her reaction wasn't great, it was human and even warranted.

The rest of us in that conference room? We huddle up and can't stop talking about it.

Posted at 11:20 AM in Communications, Culture, Leadership, Workplace | Permalink | Comments (1)

I too have seen this movie play out before me during my corporate life. Heck, I actually had a starring role in a couple of the productions.

We used to call this"dickish" behavior running for "class president". It seems even more on target given the political arena that the Amy and Pete show is showing on.

Pete's full-frontal assault was a little over the top. I more often would see the more subtle attack where the perpetrator (aka dick) would ask a series of gotcha questions all designed with the purpose of embarrassing their rival. The dick, if they were feeling particularly emboldened, would then go on to answer the questions in a not so subtle effort to show who was mentally superior.

I, like you, would do everything to avoid eye contact and not be drawn into the line of fire.