Interesting pull from the news for you today with a little Capitalist analysis.

You've heard of Cards Against Humanity. Have you heard of a acqui-hire?  It goes a little something like this: 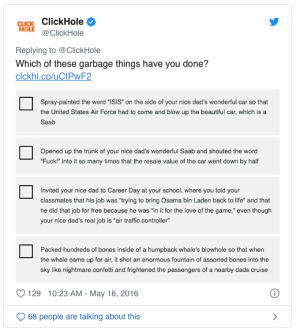 ac·qui·hire
/ˌakwiˈhīr/
noun
noun: acqui-hire
1. an act or instance of buying out a company primarily for the skills and expertise of its staff, rather than for the products or services it supplies.
"this would appear to be a straight acquihire to pick up an engineering and product design team"

The art of the acquihire is alive and well for companies like Google with unlimited resources, who often buy companies strictly for a key group of talent - often 10-20 key employees - even though they think the product of the company they are buying is trash. Put some wealth in the pockets of the targeted talent, lock them in with employment agreements and slowly push them towards projects/lines of business you think have more value.

Back to Cards of Humanity - they're in the news with an acquihire, but with a twist - they're giving a large part of the acquired company to the employees of the company. More from BuzzFeed:

Cards Against Humanity, the card game company, purchased ClickHole.com from its owners at G/O Media on Monday for an undisclosed amount in an all-cash deal, BuzzFeed News has learned. ClickHole’s employees will become the majority owners of the site. Although terms were not disclosed, the Wall Street Journal reported in November that the sale price was likely to be less than $1 million. The Onion, which created ClickHole, will remain a part of G/O Media.

“We’re giving them funding, and if they ask us, we’ll be an advisor,” Temkin told BuzzFeed News, saying that the ClickHole team will operate independently, with financial support. “We just want to give them a chance to do their thing. They’re really capable — really smart and innovative. And I don't know if they’ve had that opportunity before to try all these creative [ideas for the site].”

The Onion launched ClickHole in 2014 as a send-up of sites like Upworthy and BuzzFeed. It moved on to satirizing online political discourse with PatriotHole and ResistanceHole. Yet it has consistently transcended mere parody and created its own sublimely absurd universe. Quizzes like “Which One of My Garbage Sons Are You?” or its running series of fake banal quotes from celebrities earned it a loyal, independent following.

Cards of Humanity is doing an acquihire with a twist with this acquisition - they found a troubled company for sale, and believed in the talent that existed. BUT - this form of acquihire transfers wealth to the talent not directly to their bank account, but by giving them ownership in the company.  That's a powerful retention tool, and if for some reason they can't make it work, the talent is sure to remember that Cards gave them a chance to save the company and turn it around through their investment and subsequent transfer of ownership.

Moving acquired talent to ownership positions is a powerful play.  And by "talent", I mean people that make up quizzes like "Which one of my garbage sons are you?" It's 2020 - quizzes like these matter!

For great point of view on all things employee ownership and ESOP, follow who I do - Jennifer Briggs.