Home Subscribe
New Year's Resolutions For HR Pros Are All About Not Being a Slave to Transactions...
Ask The HR Capitalist: I Work at Tesla, and I'm Tired of the S**t...

RIP David Stern: On The Need for Confrontation in Leadership...

In case you missed it, David Stern, past and longtime commission of the National Basketball Association (NBA), passed away over the weekend.

But this post isn't about sports. It's about leadership, and the at times, ugly side of leadership.

Stern was arguably the best leader/commissioner in the history of sports. But to put it bluntly, Stern wasn't nice to those around him.  He had laser focus on what needed to be done.

And yes, at times, Stern played very rough. By all accounts, he was a BULLY. 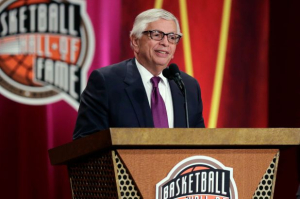 As ESPN's Adrian Wojnarowski writes, Stern was unapologetic in his obsession to swell the league with stars in prime television markets, Stern was relentless in his pursuit of big, bigger and biggest for the NBA. This was Stern's NBA, and Stern did almost anything he wanted for those 30 years on the job as commissioner. He was a visionary and a dealmaker and a tyrant and a revolutionist.

Ever heard of the No A**hole Rule?  Sure you have. It's a good one, but the secret to the No A**hole Rule is that it doesn't apply to visionary leaders. Sometimes in key positions, you need a**holes.  A**holes get shit done. Of course, the a**hole in question better be world class in many things and deliver on the vision. If they deliver, you accept the a**hole tendencies.

Translation, if someone is good enough as a leader, you accept the tyrant tendencies because being a tyrant is all about EXECUTION.

David Stern was a Tyrant. But the NBA tolerated it because he was that freaking good. Go read the Woj story linked above and do a google search and read a few more memories of Stern as a leader.

I'll leave you with one of my favorite accounts of Stern as tyrant from Ethan Strauss of The Athletic:

The previous commissioner’s old NBCA speeches did not welcome participation from coaches, especially the one given in Chicago, shortly after the NBA had signed its 2007 national TV contract. According to multiple coaches who were there, Stern communicated the importance of the TV side having access to locker rooms. Then-Chicago Bulls coach Scott Skiles raised his hand and told Stern, after a preamble of “no disrespect,” that the locker room was his “sacred space.”

Based on multiple coaches’ retellings of this legendary league story, Stern dispatched the response with withering sarcasm.

“Well, let’s see,” the smiling commissioner began. “On the one hand, we have eight billion dollars from our broadcast partners. And on the other hand, we have … Scott Skiles!” Stern then lit into him, telling Skiles in so many words and curses to shut up and that he didn’t want to hear any more out of him. Skiles went quiet, as did the room.

“He was neutered,” one coach relayed of Skiles. “Scott thought he was brave. And after Stern was done with him, he wasn’t brave no more.” All the coaches in the room got the message. Commissioner Stern wasn’t asking. He was telling. And woe be unto whichever clipboard clinger flouted the dictate.

RIP David Stern. You were a tyrant.  But you got sh*t done.