Home Subscribe
Ask the Capitalist: "KD, I've Been Fired and Need Your Help"...
GUY TO GUY HUGS AT WORK: Let's Agree To Get Our #### Together...

"PET or THREAT": When Leaders Try to Formally Mentor Those Who Don't Want the Relationship...

I was reminded of this fact when I read the tweet by Tressie McMillan, which provides a WOC view of 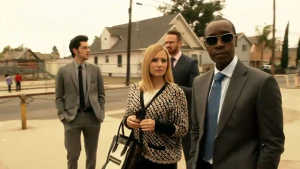 a certain type of mentoring gone wrong. If you can't see the tweets below (usually my email subscribers), click through to get to the website, because you don't want to miss this. In fact, you may want to go to my website, then click on the tweet to the get the entire series of tweets, read the comments, etc.

Let me tell you about white women’s incessant need to mentor black women who know more than they do: they are dangerous.

Pet or threat is real.

Did you get the vibe? Great. Let's start with the obvious - I'm not qualified to comment on the state of forced mentoring that gets thrust upon WOC. I don't have that identity or experience.

But I've been around a lot of mentoring programs, and I can tell you that a leader trying to create a formal mentoring relationship without the help of OD, HR or a formal program can come across as incredibly forced. It's only natural that the recipients of this type of mentoring advance might feel a bit suspicious. Add in the context of white female leader offering to formally mentor a WOC without the help of a true program, and there's no doubt that it can get weird.

"PET OR THREAT" is an incredible tagline for unwanted mentoring advances. In the context that Cottom provides in the tweets, you either say yes to allowing someone to mentor you, or you say no (hard to do for sure) and you identify yourself as a threat. Crazy stuff, but true.

It reminded me of the following forced mentoring scene from House of Lies. If you don't see the video player below, just click here. It's a great scene that features an exec attempting to neutralize someone she considers a threat by offering to mentor them. Incredible. From Cottom's tweets, this happens more than we might otherwise believe.

So why am I writing about this and what value can I possibly provide since I'm not a POC?

I'm here to report on the tweets from Cottom that I found interesting, but more importantly to share mentoring types of arrangements that are available and to judge how effective they are.

With that in mind, here's my list of mentoring arrangements, ranked from worst to first:

4--Forced mentoring relationship without controls, where an exec read about mentoring and decided to do her/his own program. This could be effective, but even if the intent is pure (unlike Cottom's tweets and my House of Lies share above), the exec likely doesn't know what she's doing. The attendee is likely to say "um, sure?" to the offer.  Forced to an uncomfortable degree. Picture the exec doing the robot, that's how stiff it is. At the far end of the spectrum, it's PET or THREAT.

3--Formal mentoring programs. OD and HR are involved and there's a process. Let's move on because all of you get this one.

2--Informal mentoring relationship where no one EVER SAYS THE WORDS, "I'M SO HAPPY TO BE YOUR MENTOR". Want to know how to determine if an informal mentor is legit? It's easy- they never say the word "mentor". It's a mindset, not a program.

1--A Boss with direct reports. Yep, surprise! The best mentors are, were and always will be the boss that was our Best Boss Ever. We've all have a Best Boss Ever, and that person delivered more mentoring value that anyone outside of the Boss/Direct Report could possibly achieve.  Note that most bosses aren't naturals and can't achieve this boss/mentor status - that's why we have mentoring programs. But the best boss you've ever had - he or she was a f***ing awesome mentor - but no one ever mentioned the word mentor.

That's my list. Remember the whole Pet or Threat thing - It's meaningful. Then remember the best mentoring relationships never or rarely use the word "mentor". They just naturally happen.