Home Subscribe
Who Sucked Out The Feeling? You Did.
What Sales Rep Title Will Generate the Most Traffic to Your Job Posting?

Trigger Warnings on Disney+...Could They Work for Managers?

Did you sign up for Disney+ over the last couple of weeks?  10 million other households did.

You didn't know you needed another streaming service, but Disney+ comes with some unique features, mainly that the entire catalog of Disney is available for streaming. That's a deep catalog.

Of course, even though the catalog is deep, there's some issues. Material sourced from the 1930's, 40's and 50's might have some theme that aren't 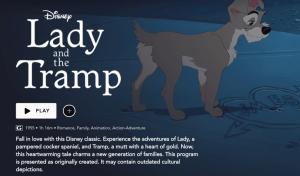 inline with today's world. For this reason, Disney has implemented a "trigger" warning of sorts on any material that might be challenging.  More from the Washington Times:

Disney’s new streaming service has added a trigger warning to certain classic movies like “The Jungle Book” and “Lady and the Tramp” to address possible “outdated cultural depictions” that could offend viewers.

Disney Plus, which launched Tuesday amid a host of technical issues, issued a disclaimer on some decades-old movies that reads, “This program is presented as originally created. It may contain outdated cultural depictions.”

The warning appears in the movie descriptions for “Dumbo,” “The Jungle Book” and “Lady and the Tramp,” among others that have faced criticism for depicting racial stereotypes.

My super-conservative friends view that as more political correctness. I view it as a masterful stroke by Disney. Let me share the warning/disclaimer again, by itself:

“This program is presented as originally created. It may contain outdated cultural depictions.”

That's solid communications work by Disney. It allows them to share the material and satisfy fans, but also warns that this stuff is from another day and time, even another world. It's even educational and can drive conversations in households with reasonable people who want that type of conversation. And of course, the warning allows you not to watch as well.

Of course, I'm a HR/recruiting/talent nerd. The first thing I thought of was this:

Could we use the same type of trigger warning for good people in your organization who are insensitive to the needs of others and seem to run afoul of public opinion at least once a quarter?

I'm not talking about people who are blatantly racist, etc. I'm talking about the people who are likable but grew up different from you and me and haven't made the complete turn to the 2020. They mean well. But they can't get out of their own way.  We don't want to give up on them.

Let's say you've got an incoming email from this person. There could be a pop-up that could say the following before you read the email:

That's truthful for a lot of people in the average organization. It feels right.

Of course, some of you would snap the warning or share it in your IG story and ruin the feature.

This is why we can't have nice things. Continue about your day without organizational warnings that could make our work life better. LOL.