Home Subscribe
Use This Quote When Convincing Someone to Decline An Offer From a Big Company...
How To Not Get Killed In A "What's Wrong" Focus Group At Your Company...

Sheryl Sandberg and the Balancing Act of Personal Mission vs Company Mission...

Personal values in the business world are tricky. While we all have the code we live by, we also have to go out and make a living for ourselves and are families.

Generally speaking, the average professional doesn't have huge conflicts between their 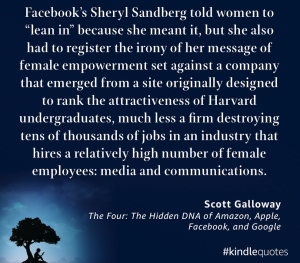 personal code of ethics and who they work for. Of course, from time to time their might be a meaningful "situation" that causes us to take a personal inventory of what's most important, but for the most part the biggest struggle we have is having to eat large amounts of **** to stay employed, because that's just the way world is.

Work is hard. Business is harder. Put on a helmet.

BUT - the most lofty among us have choices. I'm talking about people who have truly made it, creating wealth throughout their careers that helps them arrive at the point where they no longer have to eat large amounts of ****.  People who have arrived have choices - but do they have an obligation to make things better for the rest of us or take a stand against disconnects between their code and the company they work for?

This is on my mind as I read, The Four: The Hidden DNA of Amazon, Apple, Facebook, and Google by Scott Galloway. In the book, Galloway fires off this gem regarding Sheryl Sandberg:

“Facebook’s Sheryl Sandberg told women to “lean in” because she meant it, but she also had to register the irony of her message of female empowerment set against a company that emerged from a site originally designed to rank the attractiveness of Harvard undergraduates, much less a firm destroying tens of thousands of jobs in an industry that hires a relatively high number of female employees: media and communications.”

---"The Four: The Hidden DNA of Amazon, Apple, Facebook, and Google by Scott Galloway

I don't believe that Sandberg has any requirement to leave Facebook due to the origin/mission disconnect referenced between Facebook and someone who would author a powerful book like Lean In. I could easily make the argument that Sandberg can do more good for women at Facebook than she can anywhere else in the world.

But the stronger your push related to mission, the more disconnects matter. Especially when you have acquired the means, which automatically reminds me of this Ferris quote.

Is Sandberg a hypocrite as Galloway seems to be alluding to? I say no. But it's an interesting case study related to this reality - the more you go on record and define your professional brand by mission, the more people will identify the inconsistencies and attempt to hold you accountable.