Video Interviewing: It's OK to Love It, Just Know S**t Will Probably Get Real...

It's hard not to like video interviewing solutions as an HR Pro or Hiring Leader. After all, what's better than seeing how someone communicates on a basic level with some simple questions before you invest your time to bring them in and commit a minimum of an hour to interview them live?

We've all been to the bad place - you phone screen someone and it goes fine, then bring them in live and within 5 minutes, you know it's not going to happen. 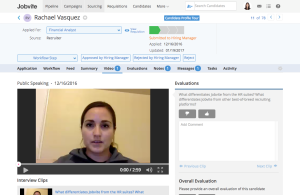 Video interviewing can prevent that.

To be clear, I'm not talking about Skype or similar solutions when it comes to video interviewing - I'm talking about robust situations designed for the top of the funnel - when the candidate applies, they are getting a chance to answer 5-7 questions, the audio of which is designed to really replace the phone screen, and the video of which is to make sure they have the command and presence necessary to do well with your hiring manager if you bring them in live.

Of course, there are some issues with video interviewing. The first one is obvious - even in 2020 (I'm rounding up, folks), most people in the world today aren't comfortable firing up the smartphone or laptop camera for an on-the-fly, taped 1-way interview. It freaks them the F out, which means you're losing good talent because they can't deal with this digital test.

The second issue is one related to bias. There's been a lot of discourse lately about the presence of unconscious bias, and if that topic continues to trend and cause us to do things like redact certain portions of resumes, then showing all identifiers via a video interview can't really happen. In a world concerned with unconscious bias, a solution with risk of straight up, old-school bias seems destined for the scrap heap.

The third issue? The video interviewing solutions really stretching the boundary claim to have AI in mix that can measure items like "personal stability".  If that seems like more than our legally challenged world can bear, you're right. The FTC is being asked to investigate HireVue (a leader in the video interviewing industry) for their use of AI in the hiring process. It’s probably one of the first of a series of challenges to the use of AI in HR. More from TechCrunch:

"The Electronic Privacy Information Center, known as EPIC, on Wednesday filed an official complaint calling on the FTC to investigate HireVue’s business practices, saying the company’s use of unproven artificial intelligence systems that scan people’s faces and voices constituted a wide-scale threat to American workers.

HireVue’s “AI-driven assessments,” which more than 100 employers have used on a million-plus job candidates, use video interviews to analyze hundreds of thousands of data points related to a person’s speaking voice, word selection and facial movements. The system then creates a computer-generated estimate of the candidates’ skills and behaviors, including their “willingness to learn” and “personal stability.”

It will be interesting to see where the privacy world's issues with video interviewing go in the future and how those concerns stack with unconscious bias to impact this industry.