Home Subscribe
Amp Up Your Employment Brand Like Domino's...Or Maybe Not...
The Movie "JOKER" is a Story about You, Me and Our Complete Lack of Empathy...

Here's What Job Security/Being Untouchable/Arrogance as a Leader Looks Like...

If you've lucky, you've felt it at some point in your career. The swagger and incredible self-confidence that allows you to throw caution to the wind, confident you have the ability to provide for yourself and your family.

"If you don't like they way I do it, find someone else to do the job."

To be sure, we've all thought that. But how many of us have actually said it? That's rare air for any working professional, and it usually means one of four things:

1--You're incredibly confident in your ability to find another job. In fact, you may already be on the market and have turned down a few offers 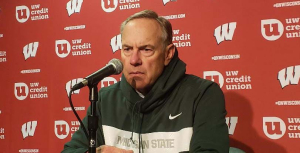 2--You at the tail end of your career and you've stored up enough acorns for a long winter (i.e., retirement).  You're daring someone to take you out.

3--You're an incredible ****, full of arrogance, disagreeable with all and really a negative force within your organization.

4--You're tired. You have to work, but you're at the end of your rope. You won't quit, so you're daring someone to make you go find another job.

I'm reminded of some leaders feeling untouchable by this report from last weekend's college football slate. Michigan State was at Wisconsin and just got drilled.  Here's how the post-game presser with Mike Dantonio went via ESPN:

"The Michigan State head coach drew even more attention to his inept offense in the aftermath of a 38-0 loss at Wisconsin, if that was even possible.

In his postgame news conference, Dantonio was asked if his offseason staff changes — he shuffled his offensive staffers’ responsibilities but did not fire any existing coaches or bring in anyone new — might have been a mistake.

“I think that’s sort of a dumb-a** question,” Dantonio replied."

That's taking "it you don't like it, find someone else" to a whole new level.

Let's put in context what 38-0 feels like in the corporate world.

--38-0 is being the incumbent provider in a renewal process and not making it to the final four and presenting live.

--38-0 is opening up a new call center and not taking a single call your first day - but you're not sure where the calls went instead - nobody got the calls.

--38-0 is agreeing to ship the new software release and when your CEO hits the site to test it, it crashes his Microsoft Surface.

May you reach the level of success in your career when you can play offense and be belligerent rather than answer questions/concerns after failure.