Home Subscribe
Feedback Notes on KD From the Speaker's Circuit: If Everyone's Happy, You Didn't Do Your Job...
FLSA Games: Exempt Salary Threshold Moves from 23K to 35K...

Chick-fil-A: Observations from the Road About Talent and Culture...

I travel a lot for work. Over the last nine years, that's meant a bit of travel fatigue and recent attempts to reduce my total number of nights in hotel rooms.

Reducing nights in hotel rooms generally means getting up as early as needed and hitting the road for mid morning meetings - rather than going in the night before.  Being up early means a need for coffee and food somewhere along the way - especially on trips where I drive into the meeting in question.

--Great service at the counter.

--You say thanks, they say, "My pleasure".  You can say thanks 5 times, they're always going to come back and say that phrase.  You could say, "I appreciate how you're going with the company line to such extremes, you robo-cop of chicken sandwich love" - you know what they're going to say?  "My pleasure".

But I'm here today not to applaud Chick-fil-A for the normal things you associate them with.  Instead, let's talk about subtle signs of how they treat people.

I generally walk into Chick-fil-A's in the morning because the restrooms are always clean, etc. I'm around about 4 or 5 Chick-fil-A locations during my normal power commutes of 3 hour trips in the car, and you know what I always see?

I ALWAYS SEE GROUPS OF ANYWHERE FROM 3-6 CHICK-FIL-A EMPLOYEES IN THE SIDE SECTION OF THE SEATING OF THE  RESTAURANT, EATING TOGETHER AND GENERALLY TALKING TO ONE ANOTHER.

I don't want to go off on too much of a rant here, but when's the last time you consistently saw that at a fast food location?

Try never.  And I see it all the time at the Chick-fil-A locations I'm around.

I've never seen it at another fast food franchise.  It's haunted me a bit, because like any HR geek, I want to know the people practices behind what I'm seeing. I thought about asking the employees but paused due to the jeepers/creepers factor, and have thought about asking to speak with a managers and then I saw this in a social post (email subscribers, click through if you don't see the photo below): 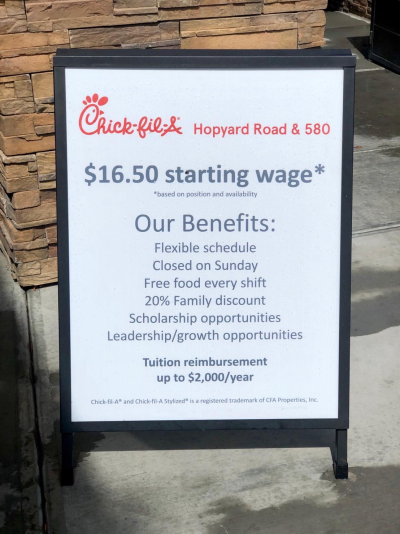 Makes sense - free food every shift.  Taking care of people, and a meaningful perk for many they employ.

I'm sure other chains offer that as well but DAMN - I always see these Chick-fil-A employees eating with each other and they're actually engaged with each other. It's staggering and meaningful from a cultural perspective.

It all comes down to how they hire. If you know anything about the company, you know franchise are owned by individual operators who are highly vetted. A living wage doesn't hurt. They're offering family discounts as well as free food and you don't have to work Sundays.  All of those things add up to provide a place as an employer of choice, one you see in the service you experience vs other chains (airport locations excluded).