When Turnover Is High But That Means You're World Class...

Except when people promote themselves by leaving you, and you have a track record of that being the primary cause of your turnover. 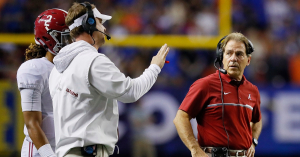 Football season is upon us, and no one has more people leave them for a better job than University of Alabama football coach Nick Saban.  Consider the following stats from Inc:

Let's talk about Nick Saban, the head football coach at the University of Alabama.

Among other things, his teams have won six national championships (five at Alabama and one when he was the head coach at Louisiana State University). But now, he's getting credit for something else -- a statistic that might seem a mixed blessing, but one that truly great leaders will recognize for the compliment that it is.

It's that Saban's team endures (or maybe "enjoys") near-constant churn among his assistant coaches.

In fact, as The Wall Street Journal points out, not a single on-field assistant coach remains on the team today who was there when Alabama last won the national championship in 2017.

Fully 38 assistants have moved on since 2007. A key point here is that most of the assistants leave for jobs with a higher profile or more responsibility elsewhere.

As of 2018, USA Today calculated that there were 15 former Saban assistants in head coaching jobs in either the NFL or college football. That list doesn't count Michael Locksley, who left Alabama earlier this year to become the head coach this year at the University of Maryland.

It also doesn't count former assistants who are now working at a higher level -- but who aren't head coaches in their own right.

If people hate you and leave for lateral moves, that's on you and it's not great.

If people like or hate you and leave for a better position after a short period of time, that's a compliment.