Home Subscribe
Why "Unlimited PTO" Is Stupid and Needs to be Replaced with Work/Life Integration...
ADJUST/EVOLVE: The Biggest Thing I've Learned In The Last 5 Years...

One Big Difference Between The Naturals In Your Company - and Everyone Else...

First up, let's define a natural in your company.

A natural is someone who:

--Performs at a high level in their current job, and 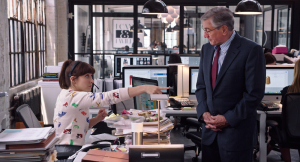 --Everyone with common sense understands they are promotable at least 3 levels above their current job - all they need is time, experience and a bit of guidance.

There are many things that define a natural. This post isn't meant to be a comprehensive listing of those things.  This post will only feature the following characteristic of the natural:

The Natural fields inquiries from managers/execs 2 or more levels above them with a incredibly high sense of urgency and always seeks to overdeliver on work product and service related to these inquires.

I know what you're saying. Is this really that important, Kris?

There's a quote from Don Draper on Mad Man I'd like to throw in here. Enjoy:

We want to believe that all of our employees have the ability to do great things.  It's not true.

I was talking to a CFO I served at a past company and she was expressing frustration at getting things done across the team she had inherited.

She had identified one team member on a team of 20 as being high potential and had tagged the rest at being disposable. The criteria was pretty simple - it was related to how quickly the team members acted when she needed something or gave them an assignment.

Are some of those team members good at their jobs? Probably. But most of them aren't naturals who are poised for great things in their careers. How do I know this?  When I think back across my career about the naturals I have known in my career, they could be juggling 30 things and when a request came in from a VIP in their domain, they always made that person feel like they were the most important person in the world.

--They didn't return the email 30 hours or more later.

--They didn't let the request go into the void without updating the exec on how it was going or a status that it was done.

--They didn't fail to engage the exec with their opinions about what might make the project better or how they went out of their way to do the best they could.

Average employees do all the things listed above.  Naturals never do those things.

You can be a good employee and not be a natural. You're just probably not going to be promoted on an annual basis.

As leaders, treat employee urgency and responsiveness to your requests as the test that it is.  Step back and observe who steps up and who doesn't.

Your commitment to coaching is noted. But you can't coach someone into natural status, so don't try.  Take it all in - the naturals are identifying themselves, all you have to do is watch and listen.