Women’s Soccer: A Primer on Success in Equality Legislation

Fun to watch and amazing all at the same time.  But there’s more! 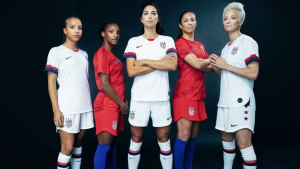 Let’s look at the impact of Title IX on Women’s Soccer in the United States.  Not sure what Title IX is?  Here’s a quick primer:

Title IX is a federal civil rights law in the United States of America that was passed as part of the Education Amendments of 1972. This is Public Law No. 92‑318, 86 Stat. 235 (June 23, 1972), codified at 20 U.S.C. §§ 1681–1688. It was co-authored and introduced by Senator Birch Bayh in the U.S. Senate, and Congresswoman Patsy Mink in the House. It was later renamed the Patsy T. Mink Equal Opportunity in Education Act following Mink's death in 2002. The following is the original text as written and signed into law by President Richard Nixon in 1972:

No person in the United States shall, on the basis of sex, be excluded from participation in, be denied the benefits of, or be subjected to discrimination under any education program or activity receiving Federal financial assistance.

While the reach of Title IX is broad, a visible outcome was the law’s impact on sports. In a nutshell, Title IX’s application in sports mandated that girls/women have equal opportunity to boys/men. In college athletics, that mandate was further refined as the number of overall athletic scholarships for women being equal to what was offered for men.

With football providing high scholarship numbers to college males with no female equivalent, the outcome over time was simple.  College sports kept the football scholarship numbers high, which meant new levels of funding for women’s athletics (as well as many smaller, non-revenue scholarship sports being discontinued for men – which is why you don’t see sports like wrestling at most American universities these days).

Women’s soccer is a great example of the positive impact of equality legislation. Title IX is a driver of the growth in high school girls’ soccer over time.

World Cup titles are nice. More girls having access to sport and the lessons that come with participation is better.

Title IX is a huge early win in equality legislation.