The Complex Relationship of A.I. and Labor's Share of GDP in the USA...

Will A.I. take jobs away?

Of course it will. The only question is whether the jobs it eliminates are replaced by other jobs up the food chain, in different and perhaps yet unknown industries and job classes.

The world has seen various waves of automation and globalization over the last century. Name the game changing technology, and there was paranoia that jobs were being eliminated and workers would be idle, never to find work to replace what was lost.

Through it all, a little talked about stat called “US Labor Share” has tracked the worker’s share of the economic pie.  For the uninitiated, here’s the definition of US Labor Share from the Bureau of Labor Statistics (BLS)”

For the sports fans out there, think about this as the salary cap number for the US non-farm workforce.  For the non-sports fans, think about your company’s salary budget as a percentage of revenue.

A quick historical look at the Labor Share (nonfarm business sector) chart from the US Bureau of Labor Statistics shows that from the 1950’s through the year 2000, Labor Share remained fairly steady at 62% to 64% of US GDP.

Then, things changed. Labor Share started dropping hard in 2008-2009 (both in and coming off the recession) dropping from 60% of GDP to a level now looking to at the 56% range. According to Fortune Magazine, that equates into about $11,000 less in annual income for the average US household when compared to an economy that provides a 65% percent share to the US workforce.

Here's a look at the chart (email subscribers, please click through if you don't see the image): 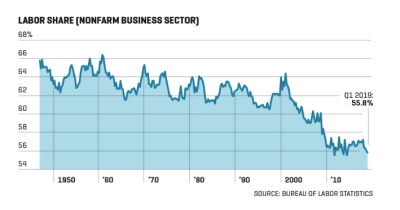 Machines displaced a lot of farmworkers in the 19th century, but millions of new jobs in manufacturing were created.  When the manufacturing sector in the US took a hit in the 50’s, 60’s and 70s’, new jobs in services became a much larger part of the economy, and Labor Share remained steady between 62% and 64%.

It all comes down to job creation as the term automation gets replaced by A.I.  What’s the new sector of jobs that’s coming online as A.I. – the new, at times scarier version of automation – displaces human labor?

Factory workers became truck drivers across the Midwest when factories went away. What blue collar profession do they turn to when automation/A.I. fully delivers self-driving, autonomous vehicles to the transportation industry?

White collar workers have been impacted by automation as well, but globalization and the impact of cheap labor available overseas has had greater impact. What happens when A.I. delivers a seamless tax return or handles coding at a deeper, more self-aware level that transcends the age-old argument of chasing cheaper white collar labor in the Philippines?

Read enough, and you'll find opinions that A.I is the beginning of the end, or overhyped to a large degree.

I’m a fan of technology and progress. I’ve always believed that jobs eliminated by technology would re-emerge up the food chain.

The current Labor Share chart in the USA is making me think deeper. We’re almost a decade into the expansion, the toughest recruiting environment for employers imaginable, and workers still can’t get theirs?

Buckle up.  The next couple of decades are going to be interesting.

Posted at 07:48 AM in Change, Compensation, Economics, Innovation | Permalink | Comments (2)