It's judgement on terminations day here at the Capitalist. HR pros get their stripes from helping the business decide when employees need to stay, and when they need to go.

The decisions are probably most important for what we'll call "overall judgment in critical situations."  You know the deal on these - an employee is thrust into a situation involving an interaction with a customer/client, a co-worker or a manager - and their judgment is on full display.

The question of whether to term based on a single event of questionable judgment is something HR pros deal with all the time. 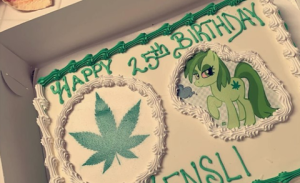 "A cake mix-up that went viral is drawing national attention, but the whole scenario is a nightmare for one Georgia woman who lost her Dairy Queen job.

The incident started gaining attention on July 2, when Kensli Taylor Davis shared a Facebook post with a picture of her 25th birthday cake purchased from Dairy Queen. The cake shows a marijuana leaf and what appears to be a high "My Little Pony" smoking with bloodshot eyes.

Davis said her mother asked for a "Moana"-themed cake from a Milledgeville, Georgia, Dairy Queen. Instead, she got a marijuana-themed cake. The post has garnered more than 12,000 reactions and has been shared more than 13,000 times, mostly by people laughing at the mix-up.

"I think they thought that she said 'marijuana' because we are from south Georgia and kind of have an accent. So, 'Moana,' marijuana?" Davis told WMAZ-TV in Georgia.

That's your situation. Here's how it went down in the workplace:

Cassandra Walker, the Georgia mother of two who made the cake, isn't laughing. She told USA TODAY she made the cake after her manager, who she says misheard Davis' mother, told her it was OK. Walker said Dairy Queen fired her for the mistake on Monday, which was her birthday.

"The manager stood behind me while I pulled the images off the internet," Walker said. "She walked by as I decorated the cake. As I boxed the cake up, she was the one who walked it up to the front."She said she was told by Al Autry, who is one of the Dairy Queen's owners, that she couldn't be employed anymore.

"This was a simple misunderstanding from the beginning," Autry said in a statement to USA TODAY. "Our cake decorator designed a cake based on what she thought she heard the customer order. When the customer picked it up and said it was not what she ordered, we immediately apologized for the error and offered to redesign it the way she originally intended. The customer said it was fine, paid for the cake and left."

The statement did not address Walker's claim that she was fired.

So what say you? Do you fire this employee?

1--The employee went through the manager and the design was approved.

2--The customer picked it up, laughed it off and had some fun with it.

3--Most HR pros wouldn't support a term in this circumstance.

If you're digging in from a investigation perspective, the fact that a manager saw and approved the design is a key thing to verify, as is the alleged fact that the manager actually took the call.  Confirm those two facts are true, and you really can't term.

But even if the employee rolled out that cake on her own - the fact that the customer laughed it off and took the cake means a term probably isn't in order.

Notable in this situation is that Al Autry, identified as the owner of a DQ, is likely a franchisee, which at times can struggle with a lack of deep HR support from people like the ones reading The HR Capitalist.

VERDICT: The fact that pot is generally illegal in GA means you need to do a written warning (don't create work product that illustrates illegal activity), but a term is over the top.

I don't think you should even do a written warning (there's nothing illegal about drawing a pony smoking pot; there's no encouragement or endorsement of illegal activity). She had her manager's approval, which means it's on the manager if it's something the owner won't support. If anyone gets disciplined, it's the manager.

But any discipline at all is way over the top. If I were a worker there and saw my co-worker get written up for creating a design that was requested by a customer and approved by my manager, I would be getting another job. Ain't no way I'd be working for someone who would throw their staff under the bus like that.

Agree with you 100% - note that a big factor in this is that I'm 100% sure this is a franchise DQ - HR practices can break down pretty quickly when franchise owners make the employment calls!!