Would You Fire Starbucks Employees Who Ask People to Leave for Questionable Reasons?

If you're reading this while sitting in a Starbucks, be aware - you're sitting a location where bad things can happen.

Starbucks - with its 30,000 locations and 300,000 employees - has become a lighting rod reflection of polarization in America.  Just over a year ago, a Starbucks 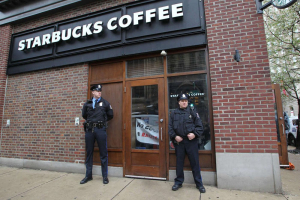 manager in Philadelphia had two black men arrested because they sat in a restaurant and hadn't ordered anything.  It turned out they were waiting for another man to start a business meeting.  After that debacle, Starbucks instituted an open-door policy. Anyone could be in Starbucks for any reason, as long as it wasn't illegal or disturbing anyone else.

In July 4th, 2019, six police officers ordered drinks at a Tempe, Arizona Starbucks.  Things were normal until a barista asked them to either move out of the sight line of a particular customer who felt uncomfortable or leave.  The police did the latter and another controversy began for Starbucks.

With an infinite number of customer interactions every day, Starbucks has an interesting HR question to ponder - Do you counsel employees who make wildly bad judgements that blow up nationally or do you fire them?

Like most things in HR, the choice of counsel or fire when incredibly bad things happen isn't an easy one. You obviously want to help the person in question grow, but that person showed such poor judgement that the incident in question is the headline in USA Today.

What's your call?  Would you counsel or fire the person who asked the cops to leave?

Here's the checklist I would use as an HR Leader before I sign off on the decision to fire the employee:

1--Give me all the context. I know the broad details of the two examples I led with above - two black men in Phili and cops in Tempe.  What's the context I'm missing before the request was made by the employee in question?  Is there more to the situation that I don't understand?

2--What's the history of the employee in question? Tell me about the person who made the call that led to national headlines. Are they a good employee? Do they have a history of making rash decisions? What have we done previously if so?  A history of bad decisions makes me less likely to want to make a save.

3--Is anyone in the organization telling me it would be an awful outcome if this person got fired? Big events should lead to someone telling me if would be a complete shame if this individual lost their job - if they're a great employee in many other ways.

4--How much political capital am I burning if I make the right call to save the employee when others want them fired? Real talk. If the mob and leadership I'm a part of want/need the employee to go, HR is generally the last line of defense to represent it might be best if they employee stays.  If you or I make that call, we need to understand the costs associated with that decision.

Note that I'm not advocating that the Starbucks employee in either situation should be saved.  BUT - the highly publicized employee issues at Starbucks provide a great backdrop on making employment calls when single, really bad events happen at a company.

Good luck with the judgment calls - here's hoping yours don't land in the Wall Street Journal.

Posted at 09:02 AM in Employee Relations, Workplace | Permalink | Comments (0)