Home Subscribe
Men Who Are Uncomfortable Mentoring Women: I'd Guess You're Doing This...
PODCAST: This is HR (Pilot Covering Sephora D&I Training, Ford OD and more)

But Will They Stay? (Weak Things HR and Business Leaders Say)

Ever hear managers, executives and even HR say some weak things?

Of course you have. For me, there's one thing that rises to epic level when it coms to weak: 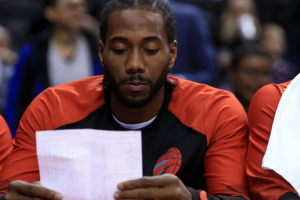 "I like them as a candidate. I'm just worried they won't stay."

This mindset values retention over talent, performance and more. The candidate is strong and wants to come. Yet, there's something about the work history (too heavy), the comp (we can't provide as much as we would like) and a myriad of other factors that make your hiring manger wring their hands about offering a job to the candidate in question.

As I write this, the Toronto Raptors are set to clinch the NBA championship tonight over the dynastic Golden State Warriors. The Raptors are up 3 games to 1, and their success is driven by the acquisition of Kawhi Leonard, for whom the Raptors traded another all star for, even though Leonard only had one year remaining when the deal was made.

That means contractually the Raptors traded for an employee who would open up their recruiting process one year later, and faced a heavy chance they wouldn't retain him.

The older I get, the more I'm convinced that if you can keep great talent in your company for a stint of 2-3 years, you're better off for having had them, reaping the contributions they make - than never having them at all.

This obviously refers to the top 10% - the most talented among us.

The Raptors traded for Kawhi Leonard and knew that it was highly likely they would have him for a year. They did it anyway. Now, they're about to win a title.

Unwillingness to bring in top talent - long term retention risk be damned - can say a few things about your organization:

2--We're OK, I know we can get better, but I'm not sure we'll improve quick enough to retain them.

3--We're not going to be able to comp this person they way they'll need to be comped to retain them.

4--I'm personally threatened by hiring someone this good. I'd prefer to have village idiots around me.

But what if you put any and all of those fears aside and hired the best person available, then got the **** out of the way and let them do their job?

They might be gone in a year. But that year might have been a hell of run.

Just ask the citizens of Toronto.

I've seen this a lot at the recruiting level too, which makes a bit more sense - "they're obviously getting paid really well where they're at, we can't attract them away" - as a reason to not even try to attract, and it's still really frustrating!

In this case here on the blog, these candidates have already opted into the application and interview process; at some point, you have to trust that if it's a bad offer they won't take it, but that otherwise they *want* to be here. If you make an offer and they accept, it means they want to be in your company. It's not necessarily on us to know or question the "why" here; there are a million reasons why someone might prefer to work for your shitty company than their current one; at some point that's good enough!

I agree that we really need to move past this mindset, it is so limiting. I have seen employment questionnaires that ask if the applicant plans on being with the company more than 3 years. I have also seen heavy hitters stay for years at a company even if they aren't getting an enormous salary because they loved the work and the company. Being in HR I have learned that sometimes even if the pay isn't where the employee wants it to be, if they feel appreciated they will stay for a while. There is a quote that says it batter than I can. "Train people well enough so they can leave, treat them well enough so they don't want to." ~ Richard Branson