Home Subscribe
Better Marketing For Corrective Action in HR...
Men Who Are Uncomfortable Mentoring Women: I'd Guess You're Doing This...

Bro-tastic vs. We Care: A Quick Review of Uber's Current and Past Corporate Values...

I'm always fascinated by the choices that companies and leadership teams make when they create company values.

The challenge, of course, is to cut through the noise and get to what's real for the employees who work for your organization. To me, values can be aspirational, but are always best served by words that describe what makes the high performers in your organization different/successful, regardless of position.

In that way, company values can be incredibly powerful. But too often they're mostly aspirational and don't tell you anything about the top talent in 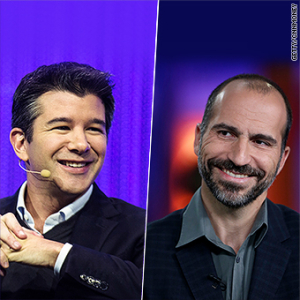 Of course, it can go the other way as well.  Leadership teams can do a great job of making company values actionable and representative of culture, but the words can mean too much - at times justifying negative behaviors.

It's a slippery slope. You want to find the sweet spot in the middle - actionable words that don't create rationalization for behaviors that seem counter to accepted people practices.

Need an example? I thought you would never ask... Let's take a look at the company values of Uber, both back in the old days under CEO and co-founder Travis Kalanick, and then look at the current values under leadership of Dara Khosrowshahi, who was brought in to provide adult leadership when the company was spiraling in multiple controversies brought on by cultural failings of the earlier leadership.

Customer obsession (Start with what is best for the customer.)

Make magic (Seek breakthroughs that will stand the test of time.)

Big bold bets (Take risks and plant seeds that are five to ten years out.)

Inside out (Find the gap between popular perception and reality.)

Champion’s mind-set (Put everything you have on the field to overcome adversity and get Uber over the finish line.)

Superpumped (Ryan Graves’s original Twitter proclamation after Kalanick  replaced him as CEO; the world is a puzzle to be solved with enthusiasm.)

Be an owner, not a renter (Revolutions are won by true believers.)

Let builders build (People must be empowered to build things.)

Always be hustlin’ (Get more done with less, working longer, harder, and smarter, not   just two out of three.)

Celebrate cities (Everything  we do is to make cities better.)

Be yourself (Each of us should be authentic.)

Principled confrontation (Sometimes the world and institutions need to change in order for the future to be ushered in.)

Damn. I love values that show what it takes to be successful at a company, but you can kind of see where it could go off the rails. More on that in a second.

Next, the current Uber company values under the all-grown up Khosrowshahi:

The values from Kalanick's time that I've highlighted note fairly aggressive values that champion assertiveness, machismo and the confrontation that was really the genesis for Uber getting off the ground. Let us not forget the amount of confrontation Uber was taking on with almost every city as they launched their service. They truly begged forgiveness and were the barbarians at the gate. It's only natural that this spilled over into the values and into the culture. Of course, that was a choice - they effectively hard coded that macho vibe into the culture, and as we saw later it became a shitshow of harassment suits, bullying, etc.

Could they have pivoted on the values once they saw the negative behaviors inside the company? Of course they could have. But that type of pivot means you can't have a founder-driven cult of personality.

Exit Kalanick, enter Khosrowshahi. The second set of values are from a grown up company. The words are softer. They're reflective of a pivot in values for a company that lost it's way, but also reflective of a company where the tough founder-driven stuff has already been done.

Could Khosrowshahi have grown Uber from scratch with this cultural DNA?  Nope.  Should Kalanick pivoted his culture once market share had been obtained and his values began to be a liability? Yep.

Welcome to the goody room of "words matter".  Nothing is easy when it comes to using values to drive culture.

Great post. My only comment is that the vast majority of people can't be rational about what values they espouse, especially someone like Travis (from my very brief interactions). He's an insanely good founder because of who he is, but is so far out on the spectrum I'm not sure he could ever course correct despite the massive incentives to do so.

This really helped me for an essay I need to write. Very well written, thank you :)