External reading/case study time today at the Capitalist.  If you haven't heard of Lil Nas X, you should ask your kids.

His short cut "Old Town Road" is a streaming sensation. This video of him surprising an elementary school in Ohio went viral this week. 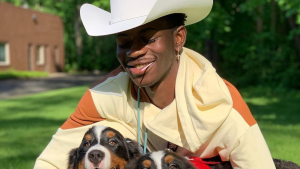 But the real lesson is in how he put this cut together.  Rolling Stone dropped a piece related to the emerging scene of sites offering musical tracks on the cheap:

"No one saw Lil Nas X coming. His race to ubiquity came impossibly quickly, and it’s a rare instance of an artist’s industry story — the making-of chronicle of an underdog star — becoming to wide audiences as compelling as his music. Ever since the 20-year-old rapper rose into the public eye a few months ago, first on the madcap video platform TikTok and then in headlines amid controversy over country-music charts, fans and executives alike have been scrambling to work out the method behind his one-song success.

Of the dissections of Lil Nas X’s “Old Town Road,” which has sat at the top of music charts for eight weeks now, neither the treatises on its roots as a social-media meme nor the examinations of the charming sonic wackiness of its melody have paid much attention to one crucial aspect of the story: how and why the song’s underlying beat — the source of its all-important Nine Inch Nails banjo sample — only cost the rapper $30. That Lil Nas X was able to put together a chart-smashing song for less than the price of a tank of gas is a perfect testament that the traditional structure of the music business has blown apart.

“I don’t know if I’m living in some type of simulation at this point,” Lil Nas X recently told Rolling Stone. His smash hit only started taking shape in June 2018, when a Dutch teenager named Kiowa Roukema, a.k.a. Young Kio, tossed a trap beat under a banjo loop pulled from the Nine Inch Nails song “34 Ghosts IV,” which he’d found on a whim while browsing YouTube’s recommended section. He uploaded it as “Future type beat” (though it doesn’t really sound like a Future type beat) to a website called BeatStars. In November, it caught the attention of Montero Hill, a.k.a. Lil Nas, who had only been making music for a few months “out of boredom” from his sister’s home in Atlanta, Georgia. Nas recorded a song to the beat, and by the close of the year, the pair’s work was all over the internet, without the two ever meeting.

BeatStars is a digital marketplace where producers and artists are able to link up without ever getting into a studio together. Artists can pay a bargain-rate fee to download a beat, leaving it open to other artists to use as well, as Lil Nas X did. If they shell out a little more, they can get an exclusive license. The website is the brainchild of Abe Batshon, a musician-entrepreneur who only found out that “Old Town Road” came out of a BeatStars deal after the track blew up on music charts and he checked his records. “I don’t think Young Kio even knew about the song until it started having legs and trending on TikTok,”

The Rolling Stone article is worth reading in it's entirety.

Lil Nas X is somewhere in between.  Old Town Road likely wouldn't have been made if he had to be the original source of all of it's elements. But sampling ideas from others (in this case a trap beat) and mixing them into something greater matters just as much as truly original ideas.

If you want to be valued, you've got to do more than make the trains run on time.

The Lil Nas X story shows that intellectual property rights are shifting faster than ever. People say their are no new ideas. I'd say that the true value of workplace creativity is being a mix artist, combining old ideas into new cuts/solutions.

Lil Nas X was sitting in ATL doing nothing less than a year ago.  But he was curious.

What's your excuse again for not creating new things in your job in 2019?  Mmm hmm.  Good luck with not adding additional value. I hope that works out.

Intellectual property rights are shifting faster than ever.