Home Subscribe
Minimum Viable Product in the World of HR...
People Don't Choose Netflix For Content - Or Your Company for Ping-Pong...

The Non-Working, Non-Credible Executive at Your Company...

Let's talk about something that impacts every organization - The perception of whether your executives do anything, and in a related topic, whether they are viewed as credible.

There's 4 buckets every executive at your company falls into: 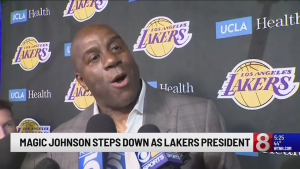 2--Doesn't work hard/do stuff but is viewed as credible.

3--Does stuff/works hard and isn't viewed as credible.

The gold standard is to have execs in #1 - Does stuff/is credible.  Engagement is always easier when this is the case.  For the most cynical of executives, they'd love to be viewed as credible without really trying to dig in and work or understand what's going on 4-5 levels below them.

Entire TV series have been based on the disconnect - Undercover Boss, anyone?  The CEO puts on a stupid wig, goes to the front lines and finds that special person they want to help moving forward - everyone cries and the CEO is now aware of how hard the work is.  Check. Then it's back to the corporate jet and the Ritz.

Why am I posting about this today? I was reminded of the four buckets of Executive perception when Magic Johnson resigned as the President of the Los Angeles Lakers (pro basketball).  For the uninitiated, Magic is a top 5 player all time in pro basketball, and he's royalty when it comes to the Los Angeles Lakers. So the Lakers hired him 2 years ago to return their organization to glory.

There was just one problem. Magic wanted the job, but he didn't want to have to work hard. In addition, the fact he didn't work hard in a job he didn't know how to do destroyed his credibility in his workplace, which for him was the community of other GMs doing work within the NBA.  You can get a good rundown of the Magic Johnson scenario here.

But back to your company.  Evaluating whether an executive works hard and is viewed as credible is tough for the following reasons:

a--It's not necessarily the executive's job to understand what everyone does and how the sausage gets made. They have a job that's different that the first layers of your company, and at times, just as important.

b--Employees love to hate. Just because they don't know what the executive does doesn't mean the exec in question doesn't work hard.  But it might tell you they need to connect more to be credible.

So how do you determine whether an executive works hard and is credible?  My first suggestion is to ask their executive peers who rely on them for services.  If the peers don't feel they work hard or are credible, it's likely you have a problem.  After all, peers at the executive level are aware of the demands of the job.  They're slow to say, "I don't know what he does", because they've heard that before about themselves.

Finally, look for command related to talent management 2 to 3 levels below them. Someone trying to understand the work and add value to the way your company's product or service gets delivered is likely to know who's good and who's not, and base it on tangible items clearly linked to success in the job, not politics or rumors.

There's a lot of people at your company who think your executives don't do anything.  They might be right.

You should try to understand if you're dealing with Jeff Bezos or Magic Johnson and take action accordingly.

Yes right but we can cover it in the OKR sheet which can solve all your problems by deciding the roles.