Home Subscribe
The Non-Working, Non-Credible Executive at Your Company...
Should We Really Trust IBM as an Expert in the World of HR?

People Don't Choose Netflix For Content - Or Your Company for Ping-Pong...

One of the things I'm fascinated by in the business world is how the media/content business consistently changes. Newspapers - gone.  Magazines - hard to find in print these days unless you're in an airport. Broadcast networks - Still around but not in a dominant spots.

One of the biggest lies the devil every told us (or made us feel) is that the way things are today is how they're going to be in the future. You think Facebook will be around forever, but history tells us that they're toast in 15-20 years.  Maybe 10.  Just look back at MySpace, AOL and Prodigy for primers on this reality.

One interesting case study going on today in media/content is Netflix.  Netflix dominates a lot of screen time in households across the world, but the recent announcement that Disney had launched a $6.99 per month streaming video service called Disney+ has a lot of people signaling this is the beginning of the end for Netflix - since Disney content will no longer appear on the Netflix platform.

That makes sense, right?  Not so fast, my friends.  Fred Wilson at AVC shared this chart on why people use Netflix in a post titled Functionality vs Content.  Take a look and we'll discuss below the chart: 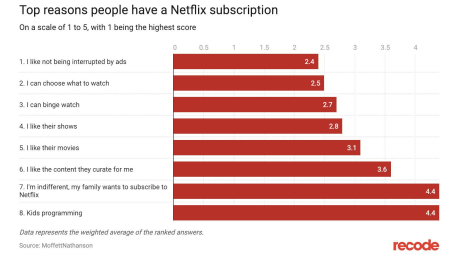 The point? People don't necessarily watch Netflix with quality of content as their first priority.  They watch it because they like - and have grown to rely on - the look and feel and the technology. The fact that the top reasons people use Netflix aren't necessarily tied to quality of content means Netflix has time to figure the content side out as Disney pulls it's content.  Of course, this the the very reason Netflix has been running a hard pivot to original content on it's platform.

Will Netflix die the death of all the other platforms before it? Probably, but it won't be because of Disney pulling content and creating Disney+. The functionality of the platform is too strong.

Which got me thinking about the following question - what functionality does your company offer that transcends the work being done in a single job/role or the industry your business is in?  Put another way, what is it about how your company does things that will make someone stick when a new competitor comes along with a great job offer?

If you look at how average companies build culture, you'll see the following answers to that question:

Those things are good, but probably not enough to hold someone after they've experienced them for 2 years. Plus, they're easy to copy.

Which begs the question - what is it about your company that would be hard to copy and become the equivalent of the Netflix interface? When you think about how your company is defined and what make it unique, that's really the question.

If you've made it this far, a lot of you can't answer the question, and that's 100% ok.  Simply move from what you have to what you could create that would be irreplaceable, much like the Netflix interface. Examples might include:

2--Our email shuts down at 7pm every night. You can send them, but they won't be delivered until 8am.

3--You can send emails to the CEO and you'll get an answer within 4 hours. Or you get a vacation day.

Obviously, these are just examples. But when you free yourself a bit to say, "what should be included in our people business platform", it becomes freeing.

Disney+ isn't going to end Netflix.  What makes your people platform as sticky to employees as Netflix is?

Dream it and do it, and you'll likely protect yourself from regrettable turnover and save your top performers.

Very nice blog. Thanks for sharing.

Just look back at MySpace, AOL and Prodigy for primers on this reality.