Home Subscribe
Will Someone Build The Uber of Jobs for Candidates?
HR Spotify: Fast and Furious Soundtrack Songs, Ranked...

As I've said before in this space, I'm aware of your take on Glassdoor as an HR pro.  YOU HATE IT.

I get it.  Shout it out loud!  The Wall Street Journal did a nice article last week saying you hate it so much, you might be a bit unethical in terms of how you deal with it.

More from the Wall Street Journal below, then I've got the commentary you expect after the jump:

During the vast majority of these surges, the ratings were disproportionately positive compared with the surrounding months, the Journal’s analysis shows. 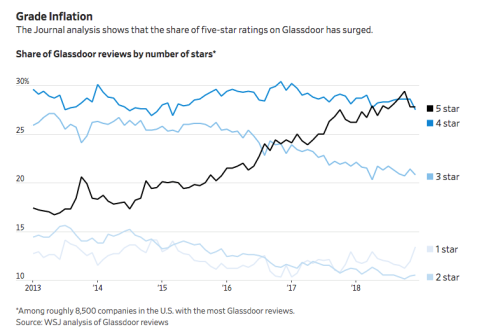 In the Journal’s analysis, five-star ratings collectively made up 45% of reviews in the months where the number of reviews jumped, compared with 25% in the six months before and after. While it isn’t possible to determine from the data alone what caused each spike, a statistical test shows the likelihood that so many would skew positive by chance is highly improbable.

Spokespeople for Slack, LinkedIn and Anthem said their companies have encouraged employees to give feedback. A Brown-Forman spokeswoman said it doesn’t have a formal strategy to solicit reviews. Clorox didn’t respond to a request for comment.

In some cases, companies have encouraged loyal employees to post reviews as part of a publicity campaign. SpaceX and SAP, for example, galvanized employees to leave reviews to make Glassdoor’s annual ranking of the “Best Places to Work.”

Other companies, including Guaranteed Rate, have pressured employees to write positive reviews in order to raise poor ratings, according to interviews with current and former employees.

Who's ready to rant? THIS GUY.

You should go read the whole article, because the data analysis alone is solid and research based.  My biggest observations are as follows:

1--The implication of the WSJ article is that employers are gaming the system.  No, you know what games the system? CREATING A PLATFORM WHERE THE ONLY PEOPLE WHO ARE NATURALLY INCLINED TO ENGAGE ARE THOSE WITH AN AXE TO GRIND.  Damn, WSJ, can I at least a paragraph about the dubious nature of the Glassdoor business model before you start blaming employers?

2--The WSJ article never mentions that the business model of Glassdoor is to call up struggling employers and offer to help them.  Some call this extortion.  I don't (wink! note to Glassdoor legal).

3--The WSJ never gets to the fact that Glassdoor packages and services in the "offer of help" mentioned above basically does the same thing as the WSJ is accusing employers of.  GD helps employers get their head around how to raise ratings, and that means proactive campaigns to get positive reviews in.

4--FYI, remind me why we would ask a disgruntled employee to proactively do a Glassdoor review?

5--The chart you see above - the one that shows 5-star ratings on Glassdoor growing from 17% of all review submitted in 2013 to 28% of all reviews in 2019 - is EMPLOYERS REFUSING TO BE USED AND ABUSED BY THE GLASSDOOR PLATFORM.

Yeah, WSJ, we asked some employees that don't hate us to do some reviews.  Do better reporting and you'll understand why.

Posted at 06:20 AM in Communications, Employee Relations | Permalink | Comments (7)

I'm glad you wrote this -- I'll need to share it as I've had trouble articulating this same perspective.

Nice. Funny thing is, the WSJ audience isn't the audience that uses GD...

Not so fast, my friend. Glassdoor is as imperfect as any crowd-sourced social media platform. It’s just that it naturally attracts the disgruntled, hence HR’s disgust with the site. Where does one go to learn what working for an employer IS REALLY LIKE?

Employers have countered the inherent bias of Glassdoor being full of reviews by disgruntled employees (or ex-employees) by encouraging happy employees to post.

I've always been a hater and you know that, I think. Your article a couple/few years about Jeannie being out of the bottle, and we had better learn to embrace the suck was one I took issue with, yet secretly feared might be truth. Now I read this and breathe a giant sigh of relief. The model does suck, and it encourages bad behaviors by them, and by us. Like Matthew Broderick playing Tic-Tac-Toe against the WHOPPER, the only way to win is not play the game.

Excellent article, but I don't know whose side I am on.

What was the date of the wsj article? I cannot find it