Home Subscribe
Daily Pay: Discount it at Your Own Peril As an HR Leader...
Netflix for HR: The Fyre Festival Documentary & Your Employment Brand...

I know, the whole thing about the wall is sexy to talk about. Caravans of immigrants!  Tear gas! The Government Shutdown won't be resolved until the wall debate is resolved!

Meanwhile, there's another issue that's playing out that arguably more important than immigration for HR and Talent Pros: Trade with China. 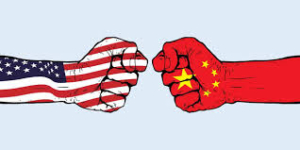 The USA had a $375 BILLION dollar trade deficit with China in 2017.  Trump said he was going to play hardball with China, and for the most part, that's exactly what's happened.  Other than knowing that the trade deficit was $375B in 2017, here's a laundry list of what has gone on in the last 4-5 months to catch you up so you look smart as an HR/Talent/Recruiting pro when you're talking to operations people:

1--The Trump administration hit China with the first round of tariffs, designed to punish China economically for not coming to the table on a serious of free trade issues, including IP theft from American companies in addition to the dollar amount of the deficit. (Jan-March 2018)

3. The US hit China with a second round of tariffs when China chose not to come to the table, China retaliates with more tariffs of their own. (June-August 2018)

4. Officials from both countries meet and agree to a cease fire related to additional tariffs announced and planned beyond those already in place, agreeing to keep negotiations alive. (December 2018)

It's safe to say that no administration has hit the Chinese as hard on trade as Trump.  If you hate him, that's cool. Just know the China trade issue is important to win on. There's probably no bigger issue economically to take on, and it seems prudent to pick that fight when the economy is strong by GDP-style metrics.

Couple of other data points on trade with China for you. Jim Cramer of CNBC reports that tech executives support the tough stance, even if they can't say it publicly at the risk of showing support for Trump.  More from CNBC:

Technology executives are telling CNBC's Jim Cramer that they're willing to endure short-term pain from the U.S.-China trade war in favor of the long-term payoff.

"When I went out to San Francisco last week, I heard the same thing from a surprising number of people in the tech industry who do not like President [Donald] Trump one bit," the "Mad Money" host said Monday.

"What they said was 'If we're going to take on China, now's the time to do it,'" he said. "They may not be fans of the president, but they're on board with the trade war."

Part of the reason could be tied to the pain points emerging in China's economy, Cramer said. On Sunday, Chinese government data revealed that China's overall December exports fell by 4.4 percent and imports sank by 7.6 percent year over year. The data also showed the largest trade surplus with the United States in more than a decade.

"This harsher-than-expected view ... may be more realistic than you think" when it comes to how tech leaders feel about China's unfair trade practices, Cramer said.

And finally, this tweet from Brad Setser shows how hard it is to reset the trade imbalance without fundamentally changing where things like smartphones are made, or at least assembled:

US imports of cell phones from China in '17 were $70b, imports of computers and accessories were similar. so 1/3 of the trade deficit right there.

Ready to pay more for that smartphone or pair of AirPods?  I thought not.  That's why the 1 Trillion in additional USA purchases by China - or something like it - will have to happen.

Winning the trade war with China is more important than the wall, but gets 1/100th of the coverage.