Face it.  You've had one of those weeks, one of those days, or one of those mornings.  You don't want to talk to people.  It's OK, that makes you human...  Sometimes people aren't the best choice to hang out with.

But don't start the day avoiding the faces you know (if not love) by evading elevator time with others at work.  Here's a chronology I got one morning recently in the walk from the parking lot to the building, then to the elevator.  Bad karma.  Check and see if this is anyone you know:

1.  I park.  Jim (not the real name) has already parked and is 20 seconds ahead of me walking up to the building from another area of the parking lot.  Jim looks intense/troubled/slightly anti-social in his body language. 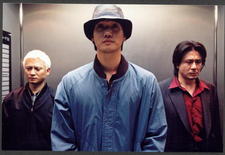 he looks peeved.  My first thought - "Let's give Jim some space and not do the fake pleasantries".  After all, he'll have to force some small talk out in the elevator (we're on the 2nd and 4th floor of our building) in close quarters.  I don't want him to peak too soon, because nothing's worse than uncomfortable silence in the elevator.  I'm all about taking care of Jim at this point.

3.  Jim sees me out of the corner of his eye and decides to turn the corner to the building doors without saying "Hi Kris!".  That's cool - he's probably doing me the solid of allowing me to save my best stuff for the elevator as well.  Nice.  What am I going to ring up with him in the elevator?  Weather?  Kids?  Red Sox?  Who knows - I'll figure it out in the next 40 yards.  I'm best under pressure...

4.  Jim enters the building.  Through the glass windows as I walk up, I see Jim punch the button for the elevator, then get really close to the doors to make it come quicker.  Can an elevator be willed to come sooner than the national average?  Some would say no, Jim says "yes".  A battle of wills ensues as I make my way to the doors.  At stake?  Jim's ability to ride the trolley up solo, without having to deal with me being all chipper and engaging.

5.  I come through the doors.  I can't see Jim at the elevators since he's locked in the battle of wills, but suffice it to say there's only a 5% probability he's riding the box without me on his shoulder, making small talk.  I've decided to talk about the new Batman movie, just to take Jim's heart rate up a few.  Always thinking about wellness and aerobic health.

6.  I turn the corner and NEWMAN!!  No Jim.  Up button to the elevator still illuminated, with Jim nowhere to be found.  I hear the door to the stairs slam shut.  Jim decided that climbing the stairs is better than making small talk.  That's 60 small steps for Jim, hopefully a lifestyle change for mankind and wellness.

Could it have been me?  Surely not.  Well, maybe.  More than likely, Jim didn't want to make small talk with anyone, especially those voted most likely to tweak him on topics where his views are polarized and he's easily agitated.

So, here's my new parking lot/elevator rule for decency.  No eye contact or small talk required when separated by more than 20 yards in the parking lot, however, you have to the take the elevator when you've been spotted.

Especially when you've already pushed the button.  Have you no shame?  Do I have to send the guys from a martial arts movie, pictured in the elevator photo above, to straighten this out?

But as I make the rule, I give the olive branch - Dude, we've all been there..  Honk if you've ever avoided human interaction at work...

Only one of those people in the elevator was a hired hand. None were left in any kind of state to battle me at the end, bring it. I got this.

As for antisocial behavior at work, we all have those days - some more than others. If you were a woman coworker, would Jim had stayed and waited for the elevator?

In Jim's case, its given him a more active lifestyle, good for him!

Side note, I'm no sports buff but March Madness was like in March, right?

Honk. Honk. Hate to say it, but I have been there. When I do get there I realize I am not in a good place. Time to stop, reflect and smell the roses. Life is too short.

It is bound to happen. I find it hilarious that one would rather take the stairs then be forced into 30 seconds of a socially awkward elevator ride.

Also, solid picture from Old Boy (one of my favorite movies of all time)

Hi Kris, I was at one time not a morning person, until about close to mid-morning. But as of the last three years of being at home, alone most days, I've learned to appreciate the company of others during the morning hours. even if you don't feel like talking, a simple nod of the head in good gesture goes a long way.

Very interesting and thought provoking. The key I've learnt is not to take things too personally in a situation like this.

Or... if the people in your workplace generally are rude, switch jobs! You see these people more than your family!

I found the best way to find a job was via niche job sites (at the time I found my academic role through www.unijobs.com I think, for those still searching). The niche sites cater specifically to your chosen career only and are great.

But, as Johnnie says above, I'm not a morning person either :)

In no known universe would I be considered a morning person, but by the time I'm pulling up to work, I've had time to ease into the day and can manage a smile and a brief, cheery greeting. If this is 'Jim's' typical morning, Jim has issues: perhaps mental illness or depression but certainly self-discipline. Suck it up, Jims of the world, you can manage a minor interaction and then appear lost in your own thoughts while someone blathers on about Batman movies.

Since I am so not a morning person, this gets a MAJOR CRAZY LOUD HONK. But yeah. Gotta take the elevator. And gotta keep it real. I always let my non-morningness be known. Or crabiness. Oh yeah. I'm a Cancer, people. We can be moody! HA! Whatever you do, keep it real so people don't assume the worst and get sad atchya.

I am sooo not a morning person. My co-workers got me a motto mug, "Coffee before talkie." But basic politeness (thanks Mom) would have made me hold the elevator, KD gets a nod, half-smile and mumbled "morning." But I gotta say...Kudos to Jim! No one needs your attitude in the close confines of the elevator...take those stairs with your bad self!

Honk - but it was/is avoiding coworkers on the subway. Elevators? pft, I can deal with a half minutes of pretending to be sort-of-social. But 20+ minutes in an underground sardine can? Seven save me...

Well, am not a sociable person, I try to avoid social interractions as mich as possible. What I really hate is when people try sk hard to get you to open up to them by asking you questions and showing you that they’re interested in being your friends! Seriously? Who are you to force me to talk to you when I dont want to? Im not going to go up to a person I don’t know and start a conversation unless I really need to. I wont go up to anyone and start talking about the weather, or the latest movies, or the Spanish Soccer League, I dont have the same interests as most people and I don’t want to.