Home Subscribe
Googling Candidates: The Trenches Say You Can't Afford NOT To....
Your External Locus of Control is Driving Me Crazy....

Dude, I'm Digital, But You Can't Ask Me to Only Use Email to Communicate With You...

Note from the Capitalist: I've got other posts ready to go, but the concept of hiring probability is on my mind today in a big way.  Take a read if you didn't see this last year and weigh in on the comments.  How you interview, how you make offers, what you say - it all contributes to something I like to call "Hiring Probability"...

We have a little game I like to play in our department.  It's called "hiring probability"...  It's like Liar's Poker, but no money changes hands...

There's talk about candidates all day, every day in our department.  Whether it's an initial phone screen, a 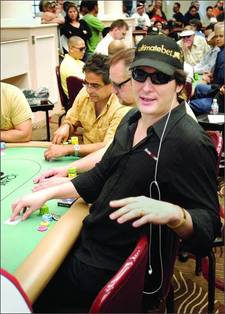 round of face-to-face interviews or even just a resume submittal, I have one question for myself and my peeps when it comes to the prospects of hiring the candidate in question - what's the probability?

Hiring probability is defined as the probability that you will get an accepted offer from the candidate and they'll start work for your company.  You can throw out a probability number when you see a resume for the first time, when you have a signed offer, and everything in between.  Is it 10%, 45%, 95%?  Only the shadow knows...

So, here's a scenario I'm currently working through.  Play the game and guess the probability we are actually going to sign the talent in question:

-Position - Sales Pro, good opportunity to earn with a company in a position of market leadership.

-Me - Found candidate with the background, great phone screen and ongoing conversations

-Hiring Managers and Next Level Influencers - love the candidate in person and on the phone.  Prepared to make offer.

-Confounding Variable - Competitive situation.  Other software providers (not competitors) like the talent too, and are circling.

-Commitment - We make verbal offer, and follow up with the details in writing.  Great offer, no comp issues.

-Confounding Variable #2 - The candidate responds positively to the offer, but then goes "off the voice grid", and doesn't return calls.  Oddly enough, returns emails though.

-Confounding Variable #3 - Candidate "kind of" accepts offer, sending background workup back and saying that they have to work through a couple of issues before they can sign the offer letter, but they'll be ready to go on 1/5.  Also says that they'll be on an early Christmas break over the next week, and they can only be reached via email.

-Me - Since the candidate won't return my calls, I politely ask (via email) for commitment via signed offer letter, citing time line, other candidates, etc.  Offer to help candidate work through issues he has regarding offer letter, like non-compete, etc.

So, play the game with me by hitting me with your thoughts in the comments.  What's the probability this candidate is going to start with my company on November 5th?

30%. It's concerning he would feel okay letting weeks go by without signing the offer. It sounds like he's shopping around the offer he has in hand.

My favorite recruiting message: Time kills all deals. Choosing to communicate only via email is a bad sign. That's what I do when I don't want to be caught on the spot with questions I can't answer. If he isn't pumped to sign the letter and can't be reached until 1/5 there's no way he will accept the offer. I'd keep recruiting. Best case scenario- he counter offers.

Something's amiss. Maybe he's stringing this out to wait on other offers or try to swing a better deal with you. Or maybe you just haven't heard the other shoe drop.

Rather than the probability that he's going to choose to accept your offer, maybe you measure the probability that this guy will be successful in your organization. There comes a point (and I think you're quickly approaching it) where you have to review the candidate's performance to date and ask yourself if this is someone you want in your organization.

If he isn't a straight talker, is a procrastinator, or just doesn't bring a sense of urgency to his career, is this who you want representing your company in a sales position?

zippo. If he does come back all cheery and ready to go are you sure he's right for you?

Something better came along and he's interviewing for it. He should be honest and tell you that he owes it to himself to pursue it and if you have to move on fine.

He'll let you know once he's assessed the other opportunity.

Put me down for 5% on this one, and if it's a relo - no chance. Your candidate is just not that into your position. If he does show up, I'd give it less than 6 months, because he/she is clearly looking for what they believe to be a better opportunity. Good luck!

50/50. The candidate may well be shopping around. You yourself admit the attraction to others. Stay in the fight. You are still selling the position. My experience is that "sales" professionals are particularly aware of their "hired gun" status and operate as contractors rather than employees. Especially the good ones.

As for email only. Personally, I probably wouldn't restrict a new employer to email only, but the reality is that you have a much better chance of getting a response out of me at any given moment via email than the phone. Voice communication is time inflexible (it must be now) and it tends to be longer than needed to cover the issues if you expect to sound human during the conversation ('to the point' interprets as rude). Written communication forces the writer to be specific and focused while allowing me the opportunity to work the response as it fits my work flow. To a large extent I view email as the same as letters via the post office. (If I ever take the time to get digital signatures set up then there won't be a difference.)

From reading your blog regularly I know you are savvy enough to know the predictions posted below 25% are close to accurate. In this market, if you're getting the "southern kiss of death" then the candidate is focused on something and you're not it.

Hard to tell, since candidate could be sidetracked because of the holidays and possible other job offers. However, if he really needs/wants the job, he will go out of his way to make himself available. Your answer may be obvious over the next 2-3 days.
I would keep interviewing if I were you, and make sure not to make any indirect promises to anyone else.
My rough guess would be 30% at this point.

20%, the candidate is shopping your offer around with other firms and will choose yours only if they're unable to match or beat it. If you were the top choice before compensation there wouldn't be this dance, so best case you get an employee that is happy for the time being until a better compensation package shows up.

I completely agree with nelking... notta a chance, once he went "off the voice grid" it was dead.

If there was serious interest (especially as a sales Pro) he would have maintained the relationship in the most personal way.

If he reappears after the holiday, he lost the other offer.

Agreed on the sub 25% estimates. Obviously waiting on another deal he's more interested in. Email allows him to limit communications and avoid a decision.

Move on. I want people who are engaged and excited to work. If not, move on.

Less than 20%...he's shopping and trying to buy some time by using e-mail only. When and if the other offers don't pan out, he'll be calling you...everyday.

So, what happened? Did he join the company? If so, did he work out?

I would think his reluctance to get in touch (even if by just leaving a voice mail message) would indicate that he was not that interested in the offer. If it did work out and he accepted I would think that the behavior you saw as a candidate (avoiding direct communication) would continue to play out once he started.

15%, and if you get the candidate - it will likely be more trouble than it is worth...

This one is playing all ends against the middle for as long as possible - and likely is a crappy liar on the phone. Tough to build an open, trusting relationship with a new employee when you won't talk.