Home Subscribe
Signing Terrell Owens - Like Hiring the All-Pro Sales Rep with a Crack Problem Because You Need Revenue...
Is "Employer of Choice" the Wrong Answer to the Right Question?

The First 63 Are Free - CBS Offers Equivalent of Crack Pipe to US Productivity....

In 2008, American businesses lost an estimated $1.2 billion in worker productivity during the NCAA tournament, mostly during its first two days.

That's a lot.  But you ain't seen nothing yet.  This year, CBS is streaming video for every game - Free....! 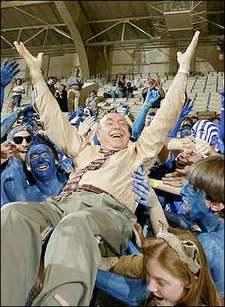 It starts this Thursday.  Your employees, with the best of intentions, are strolling along, and BAM!!! They're hit with this offer:

"NCAA March Madness® on Demand allows you to watch LIVE game broadcasts of CBS Sports television coverage of the NCAA Championship on your computer for FREE!

This year, for the first time ever, you'll be able to watch every game* of the NCAA Championship live online for free. All 63 games, from the First Round through the Final Four including the Championship Game, will be available with NCAA March Madness on Demand — so you'll never have to miss a single shot.

You'll need two methodone clinics and a multi-port EAP line to get productivity back to where it belongs.

Actually, the hit to productivity is probably overstated.  Whatever happended to shared experiences causing higher level of engagment?

Posted at 04:01 AM in Communications, Employee Relations, Workplace | Permalink | Comments (2)

Don't forget the Boss Button and if your boss tells you what's that sound, say you're listening to an HR podcast.

BTW, I got North Carolina or Memphis.

I agree and disagree.
Agree - "Actually, the hit to productivity is probably overstated. Whatever happended to shared experiences causing higher level of engagment?"