Home Subscribe
Shake and Bake! NASCAR Does Random Drug Testing...
Here's What a Job Description That Doesn't Suck Looks Like...

The Cubs - Getting Rich Via a Workplace Culture of Losing...

By the time you read this, the Cubs are on the ropes - either down 0-2 or tied 1-1 in their series with the Dodgers, headed to LA in a "best of 5" game series.

And Cubs fans across the nation just threw up in their mouth a little bit.

Take a look at the pictures to the right, and you'll find some of the icons who represent the culture of the Cubs, otherwise known as the CURSE.  Bartman.  The cat at Shea Stadium.  I've taken the liberty of adding one to the mix - Manny Ramirez.  How unfair is it to Cubs fans everywhere that the promise of a championship will, in all likelihood, be ended by a malcontent from Boston that the Red Sox actually paid the Dodgers to take off their hands?

Seriously, where else in business do you find a franchise that prints money off a culture of being the

lovable loser?  Nowhere - because sports is the only place that losing, if sustained long enough, actually becomes a positive part of the brand.  It's been a 100 years (1908, right?) since the Cubs won a championship, and at this time the franchise is currently valued as the 5th most valuable team in baseball, with a sticker price of $642 million.

Only in sports.  Can you imagine the following?

-Southwest Airlines fails to turn around planes on time, has the most expensive tickets in the business, and experiences the most canceled flights due to fleet issues.  Still, because the flight attendants sing (not take me out to the ballgame) and crack jokes, they're still the most profitable airline.

-Traces of acid in Bud Light cans routinely burn the throats of beer drinkers, but since 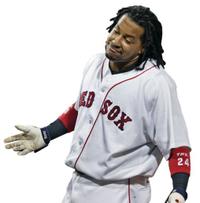 Bud's got great commercials (brand image), they're  successful anyway (note - if your throat is sore Bobby Joe, relax - this is a hypothetical).

Can you imagine either of those scenarios happening?  No, because the market wouldn't allow it. Business is Darwinian, while sports has "history" that builds identity - even if you're losing.

If you want a workplace that builds culture based on losing, look to the Cubs.  Unfortunately, it looks like the guy who helped rid Boston of the curse will be the same guy to put the dagger in the backs of Cubs fans.

His name's Manny Ramirez, and like a few of your employees, he doesn't care what you think.  Because of that, he also doesn't feel a lot of pressure, which makes him pretty dangerous - whether he's in the lunchroom or batting 3rd in a short series.

Posted at 04:05 AM in Performance Management, Sports and HR, Workplace | Permalink | Comments (0)