Home Subscribe
Balance Billing Still an Issue for Employees, Especially Under $1,000...
If HR Stinks, Is it Because You Don't Develop Your HR Managers?

You either love them or hate them.  You know what else?  They don't need no stinkin' succession plan. 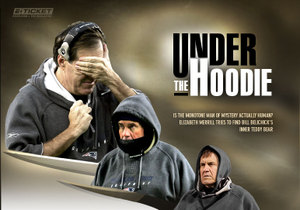 The Patriots are betting the season that their organizational culture is stronger than the need for a succession plan.

If you aren't grooved into sports or the NFL, stay dialed in.  There's something for you here.

Here's the scoop.  The Patriots are the Yankees of the NFL, the team most love to hate.  They've had Tom Brady, the golden boy.  They've got the genuis, Bill Belichick, as coach.  They win. You hate them.  Rinse and Repeat.

But, there's a big difference between the Patriots and other teams in the NFL.  It's called "culture".  They keep the employees engaged.  They bring veterans in at the end of their careers and get them to bend their games for the good of the team.  They take malcontents like Randy Moss (personal brand before joining the Patriots was the catchphrase, "straight cash homie"), embed them in the culture, and the next week they sound like a studio analyst at Fox Sports, towing the company line.

They wear shirts around the practice facility that say "Humble Pie", a hat tip to the culture of Belichick that no matter how many points you win by, you're going to get a spirited critique of your invidividual performance the day after the game.   Can you see Ocho Cinco wearing that t-shirt?

In case you missed it, Tom Brady, league MVP and quarterback for the Patriots, went down with a knee injury in the first quarter of week one in the NFL season.  15 weeks to go.  The Patriots have never carried a strong #2 quarterback to back Brady up, instead opting to go with the unknown and unproven Matt Cassell (who didn't start in college at USC) the past couple of years.

So the Patriots are betting their season that they can close ranks, rally 'round the family, and get it done without a star quarterback.  Some claim they weren't prepared, because they didn't have a viable succession plan in place should something happen to Tom Brady.

The Patriots have a succession plan.  It's called CULTURE.  They're betting they didn't need a backup quarterback who had started elsewhere or even in college.  They think they can take some good skills, expose the kid (Cassell) to a few years of their system, then when he's needed, provide him with the game plan and team support he'll need to be successful.

It'll be interesting to see if the Patriots' bet on the strength of their culture pays off the rest of the season, and if they can stay competitive.

Of course, much of the Patriots system and focus on culture was created back in 2001, when star quarterback Drew Bledsoe went down, and a young quarterback took New England to a Superbowl victory against the "greatest show on turf" - the Rams.  As a Missouri guy and a Rams fan, I can still remember the sinking feeling in my stomach when the Patriots came out after the Rams offense was introduced...as a team...

That young quarterback leading them out of the tunnel?  A 6th round draft choice pictured below named.... Wait for it.....

UPDATE - More thoughts on the Patriots and your succession plan from Lance over at Your HR Guy... 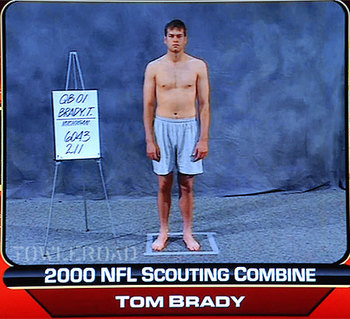 I like this succession plan! A strong and healthy culture is the best one. Maybe I'm the odd man out, but I've never had a successful succession plan in the traditional sense. When it came time to execute it (someone valuable quit), the identified successors in the plan weren't it. We promoted someone else or had to go to the outside. I think it was because managers just filled in the blanks in the plan or conditions had changed...I'm not sure, but the New England Patriot Plan sounds like it would work all of the time.

Actually, don't the Patriots have a very typical succession plan? Four years ago they identified who would replace Brady (Cassell), kept him "on deck", and when the time came to replace Brady, they promoted Cassell to the job. This sounds like standard succession planning.

The reason this stands out in the NFL is because at quaterback, generally two models are used> The star model (New England, Dallas, Pittsburgh, Indy) says that you have a superstar QB, and your backup is an unknown/unproven/untested QB. The pedestrian model says you have two capable, but not great QBs, designate one the starter, and if he fails quickly promote the other guy.

What makes the Patriots' execution of their succession plan so odd, is that typical protocol for teams using the star system at quaterback is that if said star unexpectedly departs during the season (injury), they hit the panic button, and go rummaging through the discard bin for a retread QB to hopefully save the season.

So it's not the plan that is so impressive, it's that they STUCK TO THEIR PLAN. I'm guessing that in high profile positions, many companies give lip service to their succession plan, but once a position is vacated, they turn it into an open competition, essentially discarding their succession plan.

Hey Ron - agree with your thoughts...

Chris - I thought about what you said when writing the post. Your points are good, and when you said they "stuck to the plan", in my eyes that is a measure of culture. Others panic, the Patriots did not. They stick to the plan rather than think about succession in the conventional terms.

Also - the star/scrub and 2 OK QB models are a function of markets and chance (that you have a star) rather than choice, don't you think?

I can't believe that one and half games convinces you that the Patriots don't need a succession plan or have the right one in place. As all of us reading this blog knows, one hit (or in the workplace, an unfortunate illness or accident) can send an organization scrambling for someone else.

I certainly hope Matt Cassell is Superman because as he plays "better teams" with more potent defenses, he better be able to get up off the turf or we will all be second guessing the Patriots' plan.

All workplaces should have succession plans in place, not only for executives, but for all employees. The workforce is volatile and we can't wait to make decisions until employees leave or the position becomes vacated for other reasons. Human capital is a company's best source of competitive advantage. Those organization that understand and value human capital will flourish.

Thanks for checking in. It's not that I would have done the same thing - I probably would have gone out and gotten help beyond Cassell. My real point is that the Patriots won't do that to Cassell.. They think their culture is stronger than the need to have a stronger backup to Brady... They're culture is their succession plan. They're confident in plugging in pieces without true experience as a result.

Surely you don't mean the Patriots don't value human capital with your last statement, do you?