Home Subscribe
Thanks for Helping Us Reach Our Goals - You're Fired...
Is the Downside of Telecommuting the Specter of Outsourcing?

Bariatric Surgery - Does it Really Pay for Itself in 2-4 Years?

Weight reduction surgery has long been controversial for employers, with healthcare insurers putting up multiple behavioral goals and other gates before providing access to extreme solutions like bariatric surgery to covered individuals.

Is that the right or wrong approach?  I've never had enough information to really have an opinion. 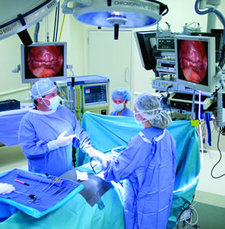 weight loss procedures.  Follow me after the snippet from the article to talk about what it means for you and me as advocates of healthcare and retention.

From information provided in the Wall Street Journal:

"Health insurers can offset the cost of laparoscopic or traditional bariatric surgery as a weight-loss treatment for obese patients within two to four years as a result of savings on other medical costs, according to a study published this month in the American Journal of Managed Care, the Wall Street Journal reports.

For the study, Pierre-Yves Crémieux, a health economist and principal at Analysis Group, and colleagues analyzed health insurance claims data for 2003 through 2005 for 3,651 severely obese patients who underwent either laparoscopic or traditional bariatric surgery. The patients in large part were female, with an average age of 44; more than one-third of the patients had high blood pressure, and many of them had high cholesterol, diabetes and other health problems.

The 2-4 year break even point is important to me, because it allows me to get my head around payback.  The thing that's confusing to me is that there's a lot of other research that talks about the failure rate of the surgery - meaning employees can have the surgery or procedure, then not do the things they need to do to keep the weight off.  I haven't read the study in full, so I also wonder if the cost of the medical complications so often written about is reflected here.

Still, the concept of payback is good to have.  We're talking about an investment in an employee to help them improve their life, much like tuition aid.  Many tuition aid programs mandate a payback agreement that an employee stay with the company for a year or two once the company has made the investment.

Now that we have payback numbers and companies have to bear the cost of this surgery, I wish companies could short circuit the red tape by allowing the employee to say, "I want to be at this company long term, and I'm willing to sign a payback agreement making that pledge as a part of this optional proceedure".

I know there are a million legal reasons why you can't do this, and I'm not looking to tie payback to other big ticket items. Medical necessity still rules the day on that end, but it seems like the big question with this one is medical necessity and payback.  That said, my take is that a lot of employees who want the optional surgery would be willing to fast track the process and would accept a payback agreement of 2 years for improved access.

Hi there,
Really nice job,There are many people searching about that now they will find enough sources by your tips.
Also looking forward for more tips about that

There is only a limited time during which a medical malpractice lawsuit can be filed. These time limits are set by statute in a common law. In civil law systems, similar provisions are usually part of the civil code or criminal code and are often known collectively as "periods of prescription" or "prescriptive periods." The length of the time period and when that period begins vary per jurisdiction and type of malpractice.

I think you are right when you say this. Hats off man, what a superlative knowledge you have on this subject…hope to see more work of yours.