Home Subscribe
You Can't Smoke On Our Campus, Unless You Are In Your Car....
Home Depot - The Situation After Slashing 1,000 HR Pros...

You think your job is tough?  I know, there's a lot going on.  You're working multiple projects, have to maintain what you were already doing, etc.  I'm the same way.  Over the past couple of years, I've paused every week or so, prodded by a death report from Iraq, and think about how easy my life is compared to the Americans stationed overseas fighting that war.

I still feel that way.  But after watching a documentary on HBO, I now think my life is incredibly easy 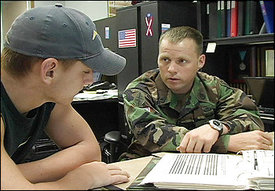 compared to another role in the armed forces - that of the RECRUITER.

Think about it for a second.  After 9/11, recruiting for the Armed Forces was obviously easier than it is today.  The country was unified as a result of the events of 9/11, and patriotism was high.  Consequently, staffing volunteer armed forces, while never easy, had many things going for it from a recruiting standpoint.

Flash forward to 2008.  After years of high body counts in Iraq, the patriotism has waned.  Recruiting has become difficult, in many ways the equivalent of trying to staff a manufacturing facility in a town filled with nothing but candidates with advanced degrees.

It's a tough life, and that's the theme of a HBO Documentary called "The Recruiter". From the Washington Post:

"For Sgt. 1st Class Clay Usie, recruiting young men and women to join the Army is the "hardest job in America today." Support for the wars in Iraq and Afghanistan has eroded, parents and teachers and coaches are less likely to recommend the military as a career and fewer than three in 10 young Americans are qualified to join.

But Usie, who believes his job is critical to defending the nation, turns recruiting into a lifestyle, rising at 5 a.m. to lift weights with candidates and to run with teenagers who struggle to make it two miles. Usie is not only one of the nation's best recruiters -- he is also a friend, a mentor, a cheerleader, a drill sergeant and, beneath it all, a salesman.

"The Recruiter," an HBO documentary that premieres tonight, follows Usie as he works in his home town of Houma, La. It is a touching portrait of a man dedicated to serving his country but also a starkly honest view of the nation's struggle with military service in a time of war.

Although focused on a small town in Louisiana, the story could take place almost anywhere in the United States. Teenagers decide whether to pursue dead-end jobs, a college education or the military, all the while navigating the desires of their parents, some of whom desperately want them to stabilize their lives while others fear sending their children to violence halfway around the world.

"I'm sure Iraq is full of a bunch of nice people, but should my son die for them?" asks one father and military veteran, whose son Bobby could be college-bound but has dedicated himself to becoming an elite Army Ranger. "That's the conflict I have."

What was especially compelling for me in the documentary was the profiles of those Usie recruits, all of whom have dramatically different reasons for joining the Army.  Isn't that the essence of recruiting? In addition to Bobby, Lauren wants to emerge from poverty, and her mother wants her to straighten out; Chris is enticed by financial benefits; Matt idolizes Usie and his dedication to the country.

It really doesn't matter how you feel about the war, because you'll connect with the human capital portion of this story.  Go find the replay on HBO, TiVo it or have someone tape it for you.  It's the best 60 minutes you'll spend on TV this month.

Being an Army Brat myself, I can understand the conflict that a lot of families go through when a loved one wants to join the military. You respect their dedication and bravery while you worry about losing them. He has a tough job. However, whatever people may think of the war or the military, it is still an honor to serve. It is not a right, it is a privilege.

As an Army Recruiting officer in the early '70's I had several soldiers working for me that faced the difficulties that SFC Usie and his fellow recruiters face today. Viet Nam was ending and the all volunteer Army was beginning. The recruiters wore their uniforms with pride but were riduculed and chased from schools by fellow American citizens. As an HR practitioner for 25+ years I have tried to take jobs with organizations that hire former soldiers (and other service members) because I know the work ethics of these people. I wonder - do the recruiters of today have to work part-time jobs to make ends meet?