OK, before I go off on a Dennis Miller-style rant, let me report the news first.  Here goes.. 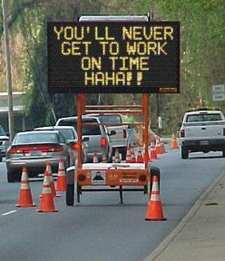 municipalities across the US), and the Birmingham News reports the benefits:

"Leaders in some Birmingham-area cities say going to a four-day workweek reduced employee absenteeism and cut fuel costs for the cities and employees alike.  Irondale - well ahead of the curve when it went to a four-day week almost three years ago - reports fuel savings and a continuing drop in absenteeism. Midfield, which made the switch this summer, is experiencing the same trends.

Birmingham offered statistics to back the change it made in July. The city in July consumed 5,581 fewer gallons of diesel fuel and 13,669 fewer gallons of unleaded fuel than in June. Net fuel cost savings to Birmingham for July is $73,695.54, according to April Odom, director of communications for the Mayor's Office of Public Information.

She said the city estimates 2,467 employees who work four-day weeks could save as much as $513,136 in personal fuel costs over the course of a year. Her figure is based on a 20-mile average daily commute at 20 mpg per personal vehicle, with gas at $4 per gallon."

OK, now for the contrarian viewpoint, or as they call it it my family, the rant.

4 day work weeks sound great. Employees get a longer weekend and, some argue, save money on commuting costs.  Other benefits include the possibility of companies saving money on real estate and utilities IF they can reduce their space needs as a result of the program.

Every employee wants a 4 day work week.  I've been asked about the possibility 4 times in the last week.

But there are serious drawbacks to the 4 day thing.  Packing 40 hours into four days isn't necessarily the most productive way to work. Many people find that eight hours in a day is enough, and requiring them to do two extra hours a day can cause morale issues in other ways.  Folks with kids can be disadvantaged due to child care considerations, etc.

And then there's this little consideration in the category I call.... RESULTS...

I get that most businesses have office hours, even for exempt employees.  I also know that manufacturing environments have to hard-code hours from a production standpoint.  I get that.  For the purposes of the rest of the rant, I'm going to address your exempt level professional worker who is not supervising a production/manufacturing environment.  You know the type - they have decision making authority about when and how they work on their responsibilities and objectives.

Here's the alternative.  Loosen your iron grip on face time, enhance how you do performance management in your organization (by measuring performance more frequently) and LET GO.  Allow people to telecommute some.  Offer flexible hours as long as the customer gets served.  Measure how people are doing every couple of months.  Manage by results, manage by objectives, manage by output.

Whatever you want to call it.  Just don't manage by hour count.  Unless you're on the factory floor, it's a surefire way to ensure you get less of lots of things - engagement, passion, innovation, etc.  Some people can get it done in 35 hours, some need 55 hours.  So stop counting hours and start counting performance and results.

Of course, that's just my opinion, and I'll be working from somewhere usually more than 5 days a week - because I love what I do...

of course I agree that it has to be all about the results. The same goes to telecommuting and everything else about flexibility. Offering a 4 day option as part of the choice for individuals is nice though. I had a 4 day school week for 1 year in High School and I loved it. Was able to play sports, work 2 days a week and still get some "free time" in.

You are right. I implemented 4 day work week some weeks ago in my insurance dealing company, but I left the option of 5 day week too! As you said, every person is special - somebody can work at full steam 12 hours and then enjoy prolonged weekend. Somebody is not able to do anything after 7-8 hours and more work hours have no meaning. anyway, I think most of the employees will prefer 4 day work week...and after some months I will see the results!
Lorne