Home Subscribe
Succession Planning - Let's Set Up a Boxing Ring and Make Them Compete for the "Ready Now" Tag....
Pulp Fiction? Is the Key to Wellness (And Weight Loss) Keeping a Diary of What You Eat?

Employee Engagement 101 - Red Sox Pay $7 Million For Manny to "Not Care" Somewhere Else...

Remember when we talked about Zappos offering every new hire $1,000 to quit to test their engagement level?

From Dan Shaughnessy of the Boston Globe:

"We're going to miss the majestic homers, the pajama pants, the goofy antics in left field, and 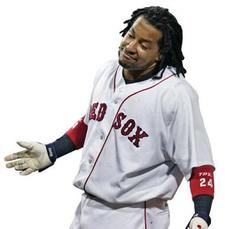 the bathroom breaks and cellphone calls from inside the Wall.

Too bad his final days were so ugly. In the end, Manny had few friends in his own clubhouse and much of the fan base had turned against him.  On a night when the Celtics were playing the Lakers in the NBA Finals, Manny slapped Kevin Youkilis, igniting a dugout scuffle. On June 29, Ramirez attacked 64-year-old traveling secretary Jack McCormick when the club official said he might have difficulty satisfying Manny's exorbitant, last-minute ticket request. The club sanctioned Ramirez privately, but there was no suspension. A week later, manager Terry Francona sent Manny up to pinch hit against Yankees ace Mariano Rivera. It was Manny's day off, and the slugger appeared totally disinterested, looking at three strikes without removing the bat from his shoulder.

Here's how bad the Red Sox wanted Manny gone.  By trading him to the Dodgers, they parted with their cleanup hitter. They gave up two prospects. They're paying Manny's salary FOR THE REST OF THE YEAR ($7 Million). And they forfeited the two high draft picks they'd have gotten if they lost him to free agency.

I just became a Red Sox fan.  How can you not cheer for the Sox down the stretch after they paid $7 million large to take a stand against an un-engaged employee?

Kris - This is a fantastic post! It's all about engagement and Manny certainly was not. I watched his first press conference in LA and he was talking about how he's going to cut his hair because well, you just have to follow the rules. Kind of funny coming from him.

But...I think employees are the same way. They can become disenchanted with their current situation so the grass is greener elsewhere. When that happens, employers need to just move on. There is no sense in fighting it because the attitude can bring others in your organization down too.

Boy, can I understand the Red Sox in this situation. It does not take many disengaged employees to totally destroy a team. In our workplace this behavior is effectively dealt with through corrective action, and ineffectively dealt with by ignoring the problem. I am a firm believer in good corrective action. The only time it fails is when the employee chooses not to change. I wish I could send all our managers to a “Crucial Conversations” seminar to equip them with the tools to address attitudinal issues.

excellent post. I think that this does set a good example for many managers who are not able to see the bigger picture. It is so easy to keep someone around who is a problem when they have some obvious strengths. I admire those who see the bigger picture and realize that being held hostage to someone with gifts but not a team player is just not worth it. Ever.