Home Subscribe
Welcome to the HR Version of the Hotel California...
Why Aren't There More Fistfights in the Workplace? Pay Transparency, etc.

Those Who Play Sports Make More Money Than Couch Potatoes...

There's always been a school of thought that playing sports as you grow up has value.  Regardless of your skill level, the thinking goes that, via sports, you learn valuable lessons about persistence, competition and how to be a good teammate.  JLee wrote about it over at Fistful of Talent earlier this week.  I agree with those thoughts, but would stop short of saying that sports are the only way to learn those lessons.

Apparently, being active in sports may also be valuable when you're all grown up.  From the Wall Street Journal (hat tip to Capitalist reader Christopher): 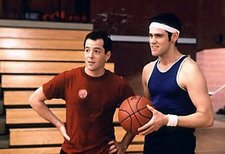 as an additional year of schooling.

That’s the conclusion of a study published by the Centre for Economic Policy Research that explores the relationship between leisure sports and labor market outcomes. Its author, Michael Lechner of the University of St. Gallen in Switzerland, takes a rigorous look at how the decision to play sports influences one’s wages years down the road.

Using survey data that followed the lives of thousands of Germans from 1984 to 2006, the German Socio-Economic Panel study, Mr. Lechner found that sports-playing adults saw a boost in income of about 1,200 euros per year over 16 years when compared to their less active peers. That translates into a 5-10% rate of return on sports activities, roughly equal to the benefit of an extra year’s worth of education.

It turns out, according to Mr. Lechner’s calculations, that only about one-fifth of that increase comes as a result of better health. Some of that unexplained component could be chalked up to social networking benefits. In fact, the sports-playing men in Mr. Lechner’s study reported a significantly higher level of “social functioning” than did the less active men. The fact that the German survey followed people over time allowed Mr. Lechner to compare people with the same amount of sports activity in their past. So former high school athletes were only compared with others with a similar amount of experience."

Click through for the comments on the original article regarding testing bias, confounding variables, blah, blah, blah.  Interesting to see some science behind this, and more interesting to note it's about participation in sports as an adult, not the lessons learned as a child.  They even control, in the study, to compare adults who had similar activity levels as a child.  So they're comparing the child sports prodigies with each other.

Me?  I'm still hooping like Jim Carey in Cable Guy.  Making friends and influencing others just like him.  We usually play prison rules over at the Y - you should stop by next week.  Here's some video of what to expect...