Home Subscribe
When Employee Engagement Advice Doesn't Sound Like Tony Robbins...
You Just Fired Someone - Should You Let Them Say Goodbye?

Hat tip to my friend Jon Ingham on this one, who points out an article from Management Today in the UK entitled "What's the point of HR?":

"A question: how many HR people does it take to change a lightbulb?

The answer is none – 'but it would be nice if we were represented at the meeting'. (I was 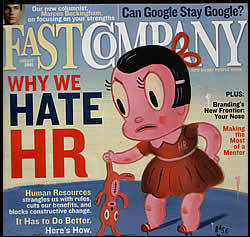 told that joke by someone from the FT, so don’t blame me.)

I thought about it when I read our brilliant Global Salary Survey feature, one of the highlights of MT’s June edition. Its headline finding this time round is that in the UK we pay our HR directors more than anywhere else in the world – a whopping £327,300 on average. That’s just a whisker under the figure the average FD gets in the USA (£342,284) – and in the States they pay FDs more than anywhere else. This revelation had our old friend and MT contributor Luke Johnson, serial entrepreneur and chairman of Channel 4, protesting: ‘I suspect that part of the reason why big companies in Britain are not as productive or entrepreneurial as they could be is because they misallocate rewards like this. Administrators are a necessary evil, but business-getters and leaders are the ones who create enterprises, not bureaucrats."

And Sue Meisinger encourages HR professionals in her goodbye speech to "stop asking, and start taking" the proverbial seat at the table.  Sue, I've thought the same thing.  Glad you said that, but the thing we need from SHRM is for the organization to take a stand and tell us what that means to SHRM, and as a result, what the mid-level HR pro should be doing to "take the seat".

My guess is that if SHRM provides that guidance in the manner necessary, they'll alienate a portion of the base that has no interest in doing what's required or isn't capable of taking the seat.  As a result, SHRM won't take that stand.  Too bad.  Because they could do it, and it would really matter.

I've said it in the past, and I'll say it again since the Europe "HR Stinks" article is bouncing around.  Every time you see an article that says "HR stinks", start a value-added project for your operators/line managers and deliver some value they don't expect.  Don't wring your hands, don't spend energy wondering why.  Instead of telling you to take the seat, I'm telling you to do something specific.

Just do it.  But don't wait on SHRM to tell you how.  You can figure it out on your own.

Interesting. I am reading this during a break in my exec ed classroom where we have just discussed the 'why we Hate HR' article (plus what you can do about it). This group of execs are from a global energy company. They want HR to be dynamic, accountable, results focused. I think that HR can justify these rewards when it has those characteristics. What needs to be done is perfectly clear. The bigger question is, as I think you are suggesting, whether HR has the will, the ability, and then the opportunity to show itself. Some companies do this and win, others no.so.much...

Second to the "why doesn't anyone give us a seat" is the "here are the 10 reasons that we can't do good analytics at my company" whine. I agree with you 100%. The answer to both issues are

1) what are you waiting for? Make your own invitation or it will never happen.
2) Be specific and do something real. Something you can control and show success from
3) lather-rinse-repeat

Build on success and build on value. There is no "quick fix" other then for the company to get rid of you and bring someone in that can do the things above. So if you want to be the person who gets the seat you need to make it so. If you want to only complain, you will either find yourself a few years later with the same dilemma or you will find yourself replaced.

If SHRM had one iota of courage, this would be the issue they would lead HR on. They don't and Meisinger's speech is the ultimate culmination of that cowardice. It is like the President making a speech on January 19th saying "Hey, I really hope the next guy comes in here and really balances the budget" after he spent the last four years screwing it over and taking the easy route.

This is why common sense stuff like "Instead of whining about perception, why don't we change it?" is completely ignored. Why were we asking ourselves to the big kids table in the first place? That is evidence enough that we weren't ready for the big show.

just wondering if anyone converted those pounds to dollars like i did... the UK figure, i believe. the US figure - should that be dollars or do they really mean pounds?

Far be it for me to challenge Management Today, but I'm not entirely confident in their figures for UK HR directors - and having looked at the original article I'm a bit worried that it doesn't tell us anything about sample size or selection.
Specialist UK salary survey firm CELRE found the median annual salaries of British HR directors to be somewhat closer to £120,000. That's based on payroll data provided by 84 firms and covering some 5,000 HR practitioners.
The same round of autumn 2007 surveys found the median for HR directors to be a bit over £132,000.
I have to declare an interest in as much as I work for CELRE. But ask yourself this: which set of figures makes the best headline - and which sounds the most likely?
Incidentally, you can check out the press releases which include top level figures and info on sample sizes at www.celre.co.uk.

Correction: that second figure of £132,000 in the previous post should be for FINANCE directors. Apologies.

James - Good thoughts, and I absoultely question everyone's will to do something about it. It takes effort and skill, and even if someone has the ability, they don't always want to put in the effort.

Mark/JLee - not sure about the figures. I just cut and pasted from the article. If you want to do the conversion, please post it here. The theme is still the same. Doesn't really matter what you make, if you're a HR pro, you're either part of the problem or part of the solution.

Lance - thanks for pitching in. I think you and I see things in a pretty similar fashion. After 5 or 6 years of hearing the HR stinks thing, it's too bad the outgoing speech was a message to take the seat without a snippet of the "how", which is the leadership thing you mentioned.

So the challenge is this.. those of you who have read this blog post that already have your "seat at the table" tell the other readers how you got there. What did you do to earn/grab the seat? Perhaps this is a good subject for multiple blog posts. Perhaps one of those themed HR Carnivals.

Great minds think alike. I have the next carnival, and figured out last night that the next theme of the carnival is "Take Your Freaking Seat at the Table".

Looking forward to your submission - I'll get the note out over the weekend - doesn't really matter what people submit, I'll twist it into that theme....

Why does HR stink? In my experience HR is so far removed from the business, they barely know why the business exists. So they beg to be included, "invited to the meeting." Newsflash - the meeting isn't where decisions happen. And what value would you expect to add to a meeting where you sit back and wait to be presented to? The best you can hope for is to be patronized when you make some "captain obvious" remark.

Can HR be strategic? Perhaps, but I haven't seen any proof.

We're still reading "HR Stinks" articles? How many years has it been already? Why hasn't our image changed? Like Charlie Brown says, good grief!

I'm ready to do an HR Marketing blitz. I like to be part of the best of the best. Are we ready to join forces and be done with the stink already?

Here's a few things I think we need to get over:
-Everyone thinks we still stink.
-We will always be a revenue sucking department. Just like IT. Just like Accounting.
-Getting a seat. Do you even know what you'll do when you get that seat? The "seat" isn't the final goal. You can still lose the seat when you get it.

So, how about getting un-stinky?

- Do your customers and execs know what you do?
- Do you and your HR team know what you do?
- Do you know the cost of all programs you administer? Do you have short-term/ long-term plans in place to reduce/contain costs?
- What is your customer service policy?
- Do you regularly streamline/six-sigma/etc. the hell out of all of your processes?
- Do you compare your HR to other companies' HR?
- Do you benchmark and review your own HR department every year?
- If you had to create an Annual Report for your HR dept, could you? What would you put in it?

There are so many things we can do! Are we doing them? If we are, then why aren't we marketing the heck out of them? We should be reading articles like "From Stinky to Shine, the New Age of HR Sparkles".

I think it's time for a good 'ole gap analysis. We obviously don't want to have a stinky image anymore, so how do we get from here to there?

Great post. To Sue's point specifically: "stop asking, and start taking" the proverbial seat at the table -- HR must do, especially as employees are getting more nervous in this "economic downturn." A recent study we conducted revealed that although 87 percent of respondents (HR and finance professionals across industries from around the world) believe that HR should play a more strategic role than in the past, only 63 percent believe HR has the right amount of input in the company’s strategic direction. More here: http://globoforce.blogspot.com/2008/06/bridging-gap-between-finance-and-talent.html