Home Subscribe
Ann Bares of Compensation Force Joins the Workforce Lineup...
Taking a Job In Another City - Cool, Unless You Have to Sell a Home...

A couple of weeks ago, Starbucks was in the news, ordered by a California judge to cough up a bunch of cash related to practices surrounding tips.  The hits keep on coming for companies who compensate a portion of their workforce related to tips.

Today's jury verdict related to tips?  American Airlines was ordered to pay 9 skycaps in Boston 325K for lost tips when the airline imposed a $2 per bag surcharge for curbside check-in.  From the Boston Globe: 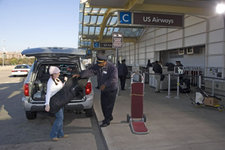 Airport a total of more than $325,000 for tips they lost when the airline began charging passengers $2 a bag for curbside check-in service in late 2005.

In what is believed to be the first legal challenge of baggage fees imposed by several airlines in recent years, the jury in US District Court in Boston found that American Airlines violated the state's tips law by keeping the $2 fees. The jury also found that the airline had made it harder for skycaps to earn a living.

"We're very pleased that the jury saw what American Airlines is doing here, which is digging into the pockets of some of its lowest-paid workers to boost its own profits," said Shannon Liss-Riordan, who represented the skycaps, several of whom hugged one another and brushed away tears after the verdict.

Since the fee went into effect in September 2005, skycaps testified, daily tips have plunged because many customers mistakenly thought the workers keep the $2 fee charged for handling bags at the curb and were reluctant to tip on top of it. One of the skycaps testified that his daily tips fell from about $200 to about $70 or $80."

Interesting verdict.  Solid comp professionals keep an eye out for the impact of business decisions on total comp, but this is the first decision I can recall that questions a company's ability to establish prices for services.

My standard for the skycap tip was always a buck a bag, minimum of $5.  That's how I roll.  Of course, I never saw the surcharge....

Posted at 04:01 AM in Compensation, Employee Relations, Litigation | Permalink | Comments (3)

This is an interesting decision. I feel for anyone who is responsible for comp and deals with tipped employees. I always thought (not a comp expert) that tips were part of variable pay, and that the employer did not have to guarantee any tip amount (save for min wage laws). This judge has basically ruled that employers have a right to some expected value of tip income.

So what does this mean for the restaurant server, when the restaurant decides to increase their prices (from experience, tips initially decline before the customers get used to the higher prices, then tips go up)? Does the restaurant now have to protect a certain level of tip income? This could get weird fast.

Are you sure they get a base of $5.15? As a former waitress, I can say that my houly rate was no where near that amount. It basically was there to help with taxes. However, if that's true maybe i'm in the wrong line of work!