Why HR Pros Should Love the New England Patriots...

My latest article at workforce.com is up this week, and I'm in an NFL state of mind.  What's on my radar?  I think all HR Pros who follow the NFL, in even a passing fashion, should be in love with the New England Patriots. 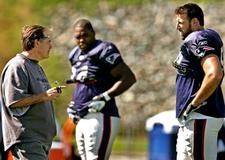 article of how the Patriots' organization gets the TEAM concept:

"The team theme rules, even when the system promotes stars. I’m from Missouri, which means I’m a St. Louis Rams fan. A few years ago, the Rams were hot and won the Super Bowl with the greatest show on turf (lots of passing and individual stars: Kurt Warner, Marshall Faulk, etc.). The next year they faced an upstart, underdog Patriots team in the early stages of the culture the Patriots have built. The game was getting ready to start, and I was watching the player introductions. The Rams went first, introducing the individual starters for their incredible offense one at a time. Next up, the Patriots started their introductions, and instead of shining the lights on their individual players for a little recognition and glory, they came out as a team and ran through the tunnel together.

I thought to myself, "That felt different."

Game over: The Patriots upset the Rams in the Super Bowl and it was the start of the New England dynasty. The Patriots still come out as a team to this day."

Love them or hate them, the Patriots are different. Not different like the Yankees, but different like in Jerry Maguire, when Jerry hugs Rod Tidwell in the tunnel after his breakout game.

Click over to the article at Workforce and check it out.  It's Super Bowl prep for Talent Management types...

The concept in the Belichick era has always been that the team comes first. Their is no I in team as we all know.

This team is destined to go 19-0. Spygate was the springboard that catapulted them to the Super Bowl.

Your article praising Belichick and the team concept of Patriots missed one important fact, they were caught cheating by the NFL. So,if an HR professional condones building your office team to follow their standard, would it include doing whatever is necessary to gain an advantage, include cheating? Sorry, I prefer to avoid double standards, its more important to establish and communicate a code of conduct and be clear about expected professional and work standards in team building.

I think you may be "reaching" with some of your theories. The "team concept" works well for the Patriots for the same reason it worked for the Red Sox. Coaching and management LET THE PLAYERS BE THEMSELVES. As individuals they are accountable and as accountable individuals they thrive as a team. They all have strong characters and if you force strong individuals to fit a mold you'll have rebellion.
With regard to the incident of "cheating", it only proved to make the team concept stronger.

As for "laurie"'s high horse comment about double standards, show me an organization without adversity.

“Seeds of faith are always within us; sometimes it takes a crisis to nourish and encourage their growth.” -Susan Taylor

I generally get more email than I do comments, which was 3X the truth with this post. I realize the crux of the issue people have with this is the cheating/spygate.

I'll use M's post as a guide. In my article, I present the opinion that the Pats are different for four reasons - they use motivational fit to figure out the best talent for their org, the can assimilate outliers like Randy Moss with no disruption, their management is focused on results, not drama, and their whole culture is team-based.

M - I don't think these factors making the Pats different is a reach. The Pats have much more turnover in their starting ranks than do the Red Sox, who can triple the payroll of the average team. The Pat's have the same payroll as everyone else. If it was as simple as leaving them alone, then the Cincy Bengals would be Super Bowl champs for the last three years. They've left their talent alone - so much so they've ended up with talent that leads the league in jail time. So the Pats are different, in IMHO it goes back to the factors I listed.

M - I'll also use your comment to talk about Spygate. What you said is true. You can't label an entire organization on one incident, and the factors listed above are independent from that. Should we all be branded by the Accounting person who embezzed money from the company? By the sales person who booked fake sales until he got caught?

I'm glad I'm not judged by the outliers I've worked with. That might be ugly as I look back. The Pats are 18-0, spygate had nothing to do with it. A team-focused culture did...

Kris
1. I think we agree.
2. The Ciny Bengals ARE a bad example.
3. It's all about empowerment and accountability. Individual and team.
4. Middle management doesn't have to worry. You get to keep your job. You just have to do it very well also.

If you've ever listened to the repeated comments by Belichick or Theo Epstein, or Tito, they never take credit for successes, only for the failures.
Robert Kraft is a different story.....but he writes the checks.